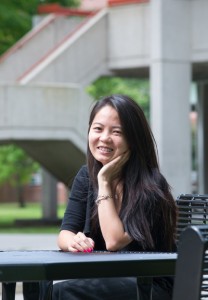 Thuy Nguyen wasn’t quite 16 and had no experience with the English language when she and an older sister left their home in Vietnam and joined their father in Lawrence.

Today, the 33-year-old Methuen resident is a married mother of two children and a dean’s list student working her way toward an accounting degree from Northern Essex Community College.

With a near perfect GPA, it is little wonder that she earned the recently established Francis W. Cleary, Jr. Memorial Scholarship awarded to an accounting major. This memorial scholarship was created in honor of the late “Fran” Cleary who taught accounting at NECC for more than 30 years. Nguyen was also the recipient of an NECC Foundation Scholarship.

“These scholarships will help me a lot,” she says. “They will go right into my school account and I will be able to buy books or pay tuition with the money.”

Nguyen is one of more than 250 NECC students to share nearly $200,000 in scholarship money for the 2014-2015 academic year. The majority of scholarships range from $500 to $1,000 and come from a variety of sources, including private donors, memorial donations, local businesses, and private foundations.

Back when Nguyen arrived in Lawrence, she was enrolled in Lawrence High School’s English as a Second Language program. She quickly excelled and graduated from LHS in 2001 at the top 5* of her class. She briefly attended Salem State University, but the realities of college life quickly overwhelmed her.

For several years, Nguyen worked as a manicurist in a nail salon. It wasn’t long before she started exploring a return to college. She chose NECC because it was close to home and more affordable than most.

So, in 2003, armed with an affinity for numbers, Nguyen began a new academic career with just one class. This led to two classes and now she has earned nearly half the credits needed for an Associate of Science degree in Accounting.

The degree is important to Nguyen, but so is serving as a role model for her children, she says. Now 10 and six-years-old, she says they see her studying and know that earning an education is important.

Eventually, she says, she would like to earn a bachelor’s degree, but for now she is focusing on her associate’s.

“I love accounting. I love working with numbers. It is the right major for me…it is just perfect.”

NECC offers an associate of science degree in accounting under the business program. Students who complete this degree have the foundation to continue on to earn a bachelor’s degree or transfer into a four-year program.

For more information about creating an endowed scholarship at Northern Essex, contact Jean Poth, vice president of institutional advancement, 978 556-3624 or jpoth@necc.mass.edu or visit the website necc.mass.edu/giving.