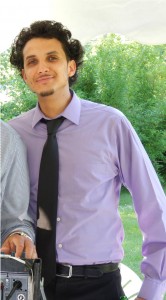 A Northern Essex Community College student, Joshua Alba of Lawrence, is providing leadership for this year’s 30th Annual Bread and Roses Festival, which will be held on the Lawrence Common on Monday, September 1 from 12 to 5 p.m.

“It’s very challenging and exciting,” says Alba. “I’ve never had this much responsibility in my life.”

A 2002 graduate of Whittier Regional Vocational Technical High School, Alba first became involved with the festival while he was participating in the Lawrence Community Works PODER Leadership Institute in 2007.

As part of a class project on cultural inclusion, his class joined the Bread & Roses Heritage Committee.

“I learned so much about Lawrence’s history, including the first waves of immigrants. It made me aware of the similarities between our cultures, our continuing struggles, and our common interest in creating stronger and more resourceful communities,” says Alba, who was hooked and has continued to be involved with the festival ever since then.

Alba is a liberal arts major at Northern Essex and he plans to graduate in 2015.

Professor Steven Slaner of the Global Studies Department speaks highly of Alba.  “Joshua was a student in my Vietnam War class and composed an essay that managed to be both poetic and analytical, an impressive combination. He is well attuned to issues of social justice and the environment.”

In addition to his role in the Bread & Roses Festival,  Alba is on the board of the Greater Lawrence Young Professionals Network, and he is the father of two, an 8 and 11 years old.

For more information on the festival visit www.breadandrosesheritage.org