Patrick Administration Announces $400,000 to Study Public Safety Needs in the City of Lawrence 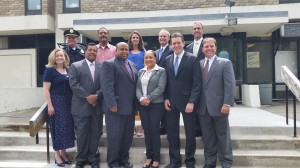 The Patrick Administration’s final five-year Capital Investment Plan for Fiscal Years 2015-2019 included $400,000 in funding for a study to assess the public safety facility, training and educational needs for the region. The study will be conducted by the Division of Capital Asset Management and Maintenance (DCAMM) and will be conducted with team members from the City of Lawrence, NECC, and the Executive office of Public Safety to determine the feasibility of a project that will best enhance workforce development and increase the effectiveness of local and regional law enforcement.

“Through these types of collaborative efforts, we are finding new ways to meet our public safety challenges and make our communities great places for residents to grow and thrive,” said Undersecretary Jordan. “By creating a partnership with the city of Lawrence and NECC we have the opportunity to make a positive change that would not otherwise be possible. I look forward to continuing to work together to serve the residents of this region.”

This funding is one of many investments included in Governor Patrick’s eighth and final five-year Capital Investment Plan, building on the Administration’s successful efforts to stimulate job creation and support long-term economic growth by making record-level investments in higher education, innovation and infrastructure projects.

“The idea of a new police station in Lawrence, along with expanded education innovation in public safety at NECC, is a dream for our community, and this money takes us one step closer to that. We thank the Governor and his team for continuing their record of keeping Lawrence in mind when it comes to capital investments with high prices tags such as this; along with our State delegation led by Senator Finegold for their dogged support of a new station,” said Mayor Rivera

“Nationwide, 85% of first responders—police, firefighters, and paramedics—get their training at community colleges. This is an exciting first step as we explore the benefits of building a state-of-the-art regional public safety center in Lawrence that will serve the needs of first responders across northeast Massachusetts. This is great news for the city of Lawrence and the Merrimack Valley, and we are thrilled to be partnering with the city and the state on this project,” said Lane A. Glenn, president, NECC

The Patrick Administration remains committed to revitalizing the Commonwealth’s gateway cities like Lawrence. Over the past four years, the City of Lawrence has been awarded over $2 million in police staffing grants, $868,000 from the state’s gang prevention grant program, and $955,000 for enhanced public safety communication operations. A testament to these efforts was a May 2014 Boston Globe Magazine Story that featured the City of Lawrence as one of Greater Boston’s Top Spots to Live.

“This announcement is the result of over a year of work by Governor Patrick and his administration, City officials, Northern Essex Community College President Lane Glenn, and the elected Lawrence delegation. I thank Governor Patrick and his administration for partnering with the City and NECC on this important project. The study could pave the way for a project that will benefit not only Lawrence, but the entire region,” said Senator Barry Finegold.

“I proudly stand with my fellow colleagues in the Lawrence legislative delegation in celebrating the announcement of these critical funds to study the city’s public safety needs. The Commonwealth’s partnership with the city and NECC is an exciting one and I look forward to seeing the results of these investments over the years to come,” said Representative Diana DiZoglio.

“This public safety study is a necessary step towards improving Lawrence. I am proud to be in support of this endeavor,” said Representative Frank A. Moran.

Through its partnership with the Patrick Administration, the City of Lawrence’s budget is balanced for the fourth consecutive year, without using one-time reserves. For fiscal year 2015, the city is meeting its school funding obligations, hiring six new police officers, has a fully funded capital stability fund as required in the oversight law and achieved a historically low 2 percent increase in health premiums due to its participation in the Group Insurance Commission (GIC). Lawrence has also received an increase in unrestricted general government aid (UGGA) of $2 million since fiscal year 2012. Additionally, the Governor’s Capital Investment Plan builds on the Administration’s successful efforts to stimulate job creation and support long-term economic growth by making record level investments in higher education, innovation and infrastructure projects.

Additionally, in the 2013 MassWorks Infrastructure Program round, Lawrence was awarded nearly $900,000 for infrastructure improvements including renovation of the Essex Street Connection and alleyways that provide critical linkage throughout the downtown and supports Northern Essex Community College’s Dr. Ibrahim El-Hefni Allied Health & Technology Center, which opened in March of 2014. This area of downtown Lawrence was identified as a Priority Development Area in the Merrimack Valley Regional Plan. In 2009, Lawrence’s Gateway and Canal Revitalization District was named a Growth District.