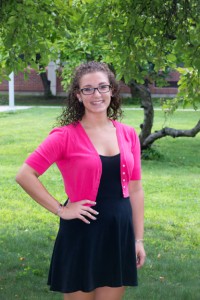 Madisen Giordano of Salem, NH, was one of the more than 200 NECC students awarded an NECC scholarship for the upcoming academic year.

Salem, NH residents may know Madisen Giordano as the young lady who cheerily prepares their coffee orders in the morning. What they don’t know is that brewing coffee is just one of two jobs she manages while attending Northern Essex Community College full time where she regularly earns a spot on the dean’s list.

The 20-year-old’s diligence and strong work ethic recently earned her a Northern Essex Community College Foundation Scholarship. She was one of 12 Salem, NH, students to receive NECC scholarships and one of 250 NECC students overall to share nearly $200,000 in scholarship money for the 2014-2015 academic year. The majority of scholarships range from $500 to $1,000 and come from a variety of sources, including private donors, memorial donations, local businesses, and private foundations.

Giordano, the third youngest of eight children, is a 2012 graduate of Pelham High School. An honors student, she briefly attended a four-year state university before the realities and costs associated with attending a large university depleted her bank account. She turned to NECC where she enrolled in the general studies associate degree program.

A sports enthusiast with 12 years of field hockey on her resume, she explored studying athletic training. A family friend instead suggested radiologic technology, which also deals with the human anatomy. After completing the prerequisites for NECC’s radiologic technology program, she hopes to be able to enroll for the fall of 2015.

“I like the idea of being able to work with the human body possibly in different settings and that there is a possibility for career advancement,” she says. “Taking my prerequisites is giving me a strong foundation for just about any science program.”

Giordano says the $750 scholarship was a welcome surprise.

“This was super important to me. When I received the letter informing me I had earned the scholarship I cried,” she says. “This will definitely help me pay for books and tuition.”

Eventually, Giordano says she wants to continue on and earn her bachelor’s degree.

NECC offers an Associate of Science Degree in Radiologic Technology. Graduates can pursue many career paths, and can work as entry-level radiologic technologists in hospitals, clinics, doctor’s offices, or with mobile radiography companies.