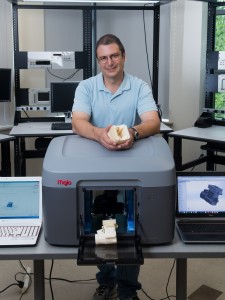 Northern Essex Community College Engineering Professor Jim Cahaly is excited about how the college’s new 3D printer will enhance learning for students in Computer Aided Design (CAD) courses.
“We have been working most of this summer on developing student projects to integrate this new technology into our core Engineering curriculum,” said Cahaly.

One project may be asking students, most of whom are engineering majors, to design their own cell phone or USB case, using Solidworks, a solid modeling design software package which is an industry standard, and then print out the actual design on the 3D printer.

Another project would focus on “reverse engineering” where students are given a detailed design of a complex object made up of several components with mistakes, which they are asked to find and correct. When the pieces are printed, it will soon be obvious whether they found the errors.

While 3D printing and related technologies—which builds objects by applying plastic material in successive layers, each layer just slightly thicker than a human hair— is more than 25 years old, the technology only recently became more affordable. The college’s commercial grade 3D printer was purchased with an $11,000 grant from the college’s Perkins allocation, federal funds administered through the Massachusetts Department of Elementary and Secondary Education.  Housed on the Haverhill Campus, it will be used by students taking CAD courses, which are offered as part of the college’s engineering curriculum and Computer Aided Design (CAD) certificate.

The applications for 3D printing are many, according to Amit Chowdhry of Forbes Magazine, who writes that 3D printing has been used to create car parts, smartphone cases, fashion accessories, medical equipment and artificial organs. 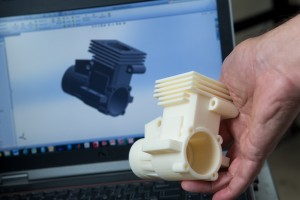 Using NECC’s new printer, Cahaly recently printed a two-stroke model engine block and heat sink that he modeled on his laptop computer. Each part, which was the size of a small digital camera, took almost a day to print.

“NASA has been using 3D printing technology to prototype its next generation Mars Rover“, said Cahaly.  “Many parts that are simply too complex or expensive to manufacture using existing machining and molding technologies are easily made directly from the engineer’s computer”
Using NECC’s new printer, Cahaly recently printed a two-stroke model engine block and heat sink that he modeled on his laptop computer.  Each part, which was the size of a small digital camera, took almost a day to print.  When the piece comes from the printer, it’s encased in protective support material which is water soluble.  After being immersed in a water tank for several hours, the protective support material dissolves away leaving a clean part.  NECC’s printer is designed to use ABS plastic which is both tough and durable.