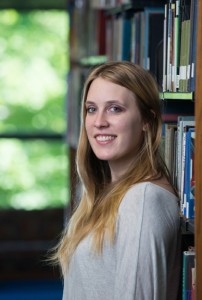 Alicia Bursey of Andover was the recipient of two NECC Scholarships.

Northern Essex Community College student Alicia Bursey knows that as a human services professional she won’t be working in the most lucrative of careers, but, says the Andover native, she believes it will be the most rewarding.

Fortified with this belief and dean’s list worthy GPA, the 22-year-old was awarded two NECC Scholarships – the NECC Foundation Scholarship and the Judy Savino Memorial Scholarship. She was one of just six Andover residents to receive NECC Scholarships and one of 250 NECC students overall to share nearly $200,000 in scholarship money for the 2014-2015 academic year. The majority of scholarships range from $500 to $1,000 and come from a variety of sources, including private donors, memorial donations, local businesses, and private foundations.

The scholarships, she says, couldn’t have come at a more critical time. As a Market Basket employee, she says her pay was on the decline as her tuition bill was coming due.

“Receiving these scholarships was really important to me,” she says. “I was really worried that I would be short on my tuition. I wouldn’t be able to go back to school without this help. I really needed the money. ”

Bursey has a history of hard work both in the classroom and out. A 2010 honors graduate from Andover High School, she is a published poet and artist. She earned the prestigious Girl Scout Bronze Award while in Middle School, has volunteered at Ironstone Farm, and today coaches a girls’ club volleyball team. She currently works at the NECC bookstore in Lawrence and just learned she will have a work-study job in NECC’s admission’s office in the fall, and she hopes to return to Market Basket soon.

Her college career actually began at a private four-year university, but after a year, she returned to Andover to help her mother – a sole, supporting single-mom – care for her ailing grandmother.

After her grandmother passed away, Bursey decided to stay local and enrolled at NECC. It took her a while to settle down and get comfortable with a major, but human services fulfills her “eclectic interests,” she says.

It may sound naïve, she admits, but “I really want to help people and make the world a better place. I could get a job just for the money, but I know I would never be happy.”

After graduating next May, Bursey plans to earn a bachelor’s and master’s degrees and eventually work for a non-profit agency or organization.

NECC offers both associate degrees and certificates in human services. These programs prepare graduates to work with individuals with substance abuse issues, mental retardation, mental illness, or developmental and/or emotional disabilities in a variety of different settings.