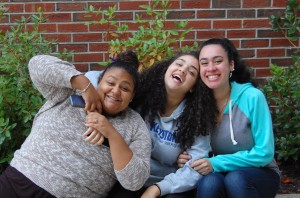 NECC student actors Erika Tejada, Kiara Pichardo, and Stephanie Bisono (left to right), all of Lawrence, will perform in “Real Women Have Curves”.

Written in 1996, “Real Women Have Curves” is the story of five Mexican-American women working in a sewing factory in East Los Angeles in 1987. It explores gender politics and the Latina immigrant experience.  López was also the co-screenwriter of the movie version of her play which won the “Audience Award” and “Special Jury Award for Acting” at the 2002 Sundance Film Festival.

NECC Top Notch Players performing in the staged reading include:

NECC offers an associate degree in liberal arts: theater option which provides students with the opportunity to take courses in acting, directing, improvisation, children’s theater or earn credits for working on college productions in stage management and technical theater.