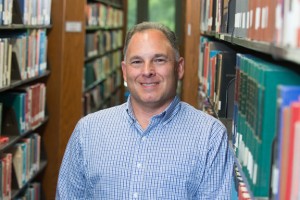 If the new director of Northern Essex’s library services were a book, his title might be “Mike Hearn: Renaissance Man”.

This social worker turned librarian turned archivist turned author and historian replaced Linda Hummel-Shea, who retired after 35 years. Hearn isn’t new to NECC, having worked as a librarian on the Lawrence campus for nine years.

The Nashua, New Hampshire resident brings with him many talents which he intends to employ in his new position. A position he perceives as creating a wafer thin balance between print and electronic services for all users of the NECC libraries.

With well over 16 years working in the academic library field, Hearn is well aware of the dramatic changes in the role of libraries universally; changes that were made or anticipated even before the multitudes carried personal mobile devices. He recalls a professor predicting that the evolving internet would rewrite the job description of librarians, but not eliminate them.

Librarians are most decidedly not dinosaurs, says the Delaware native, who surely wouldn’t have changed careers from social work to library science if he thought the field was headed for extinction.

Child services was Hearn’s first vocation after earning a Bachelor of Arts degree in American Studies from Washington College. He worked with emotionally disturbed children who were incarcerated. It was a job that took him from Connecticut, to Maryland, to South Carolina over a dozen years. It also exhausted him. A change was needed. He put the research skills he developed to use and enrolled in the University of South Carolina’s master’s in library science program.

He was a quick study and learned that while a love of books is preferred, today’s librarian needs a “firm foundation in technology,” he says.

“Today’s librarians need to be able to communicate and teach,” he says. “They need a love or passion for helping people and must have an established confidence level with technology”.

For a few years following graduation, Hearn was director at a branch of USC – in a town called Union. He and his wife, Laurie Gordy, who later briefly served as an assistant dean at NECC, secured positions at Daniel Webster College (DWC) and with their young daughter, they moved to New England.

While working at DWC, the historian in Hearn got restless and he accepted a part-time position at the Lawrence History Center. Though he knew nothing of the city’s origins, he became a bit of an expert on the immigrant city after organizing, processing, and archiving 150 years of documents, sketches, and architectural drawings belonging to the Essex Company, a group of business men who founded Lawrence for manufacturing purposes.

During this time he left DWC for NECC, but continued his research at the Lawrence History Center. Hearn’s work culminated in a 90-page, 16,000-word book featuring more than 100 images of Lawrence titled “The History of the Essex Company”. The historical retrospective is scheduled to be published this month.

Hearn says the research and organizational skills he used during a decade of archiving will continue to be used as director of NECC library services where the Haverhill and Lawrence campus libraries combined generated over 600 visits per day during the first week of school.

With his office located in the Harold Bentley Library on the Haverhill campus, the 48-year-old says he already misses the daily face-to-face interactions with students, but is eager to keep the NECC library’s current momentum and create an instructional yet lively, social hub for students.

“I want to make sure the library continues to move forward and continues to strike the right balance between print and technology to effectively meet the student and faculty needs”.

Personally, Hearn is old school and prefers to read a book via print rather than electronically. Though time is tight, he is reading “The Life of the Automobile,” by Steven Parissien, but with his new responsibilities he just might need to renew the book.