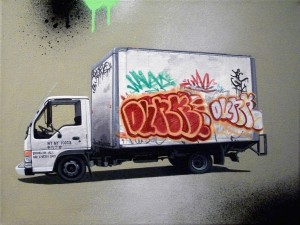 New York artist Jeff Henriquez, who draws from the city’s graffiti covered streets and sidewalks for inspiration, will present a fall show titled “New Work” in the ArtSpace Gallery in the Bentley Library on the Haverhill campus from September 30 through November 5.

An opening reception and artist talk will be held Tuesday, September 30 from 3 to 5 p.m. Henriquez, will serve as NECC artist-in-residence from September 30 through October 2, will present a gallery talk about his work and inspiration. 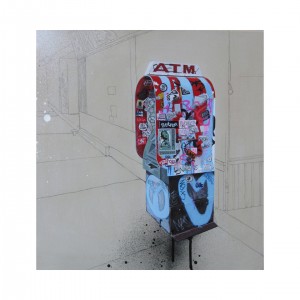 “ATM” Mixed media on board

Born and raised in Lynn, he is a 1999 graduate of the Bradford College. He is a candidate for a MFA in painting from Howard University. For two years he was the visual arts coordinator for the West End House Boys’ and Girls’ Club in Allston.

He recently had a solo exhibit titled “ROAM 2” at the UGLY Gallery in New Bedford and participated in group exhibits in Brooklyn, NY, at the NYST Gallery, the PIPS Gallery, and the Exit Room.

A former U.S. Marine, Henriquez is fluent in English, Spanish, Portuguese, and is currently studying French.

He says he draws on the tags or graffiti, history, and colors he sees on the streets of the city to create his paintings. Mailboxes, street signs and ATM’s get hit most often which make them the most interesting.

“I’m really a portrait artist of the mundane, but I look at the marks, history, and colors on a surface and I just see painting after painting,” he says. “The millions of colors interact with drips and tags. Names get covered by stickers and writers saturate very square inch of space possible to make their marks more visible than the other. It’s like a battle.”

This exhibit is sponsored by the Art & Design Dept. & the NECC Foundation. For additional information contact Patricia Kidney at pkidney@necc.mass.edu or Marc Mannheimer at mmannheimer@necc.mass.edu.