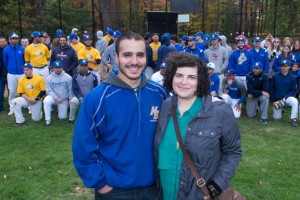 Northern Essex Community College alumnus Manny Cabral of Tewksbury could have walked right by the bone marrow registry table back in July of 2010, but then he wouldn’t have walked across the NECC athletic field this weekend with the 32-year-old Ohio woman whose life he saved.

But on Sunday, there was the 23-year-old, surrounded by his family members and hers, as they headed to the NECC Alumni Day baseball game and home run derby where “paying it forward” played predominantly in the theme of the day. NECC baseball coach Jeff Mejia, lifted by the Knights’ back to back trips to the NJCAA Division III World Series where they finished 8th in 2013 and 6th in 2014, thanked alumni and athletes for participating in the day’s events.

“Our dream is to create a networking system of alumni for business and life,” Mejia said. “We preach being a good citizen both on and off the field. Everyone has the capacity to make a difference in this world.”

He offered Cabral, a former Knights’ captain and Outstanding Alumni Award winner, who selflessly donated bone marrow over the 2012 holidays to a then anonymous host, as the very definition of a good citizen. 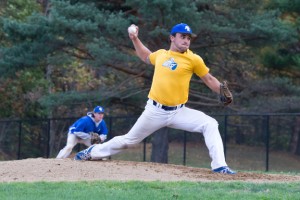 Cabral, who had Tommy John surgery just three weeks ago, is currently a senior at Daniel Webster College. He is an unlikely though not reluctant hero in a tale that spans more than four years. Back in the summer of 2010 he and a friend stumbled upon the bone marrow registry while walking the mall and enrolled as donors. The following year, a Columbus, Ohio woman, Rebecca Dolan, was diagnosed with Paroxysmal Nocturnal Hemoglobinuria or (PNH), a rare, life-threatening disease of the blood characterized by the destruction of red blood cells. She was treated at The Ohio State University Wexner Medical Center which took the proactive step of testing her two sisters as possible bone marrow donors in the unlikely event that the worst happened and she would require a bone marrow transplant to survive.

Neither was a match.

By January 2012, the worst did happen and her PNH diagnosis was further complicated by a diagnosis of moderate aplastic anemia. She was given a Horse ATG treatment. Six months later, it was clear that a bone marrow transplant was necessary.

Meanwhile, Cabral, who had graduated from NECC after a stellar baseball career that earned him a scholarship to Texas Southern University, was notified that he was a donor match. He arranged to have a medical procedure to extract the bone marrow while he was home for the holidays. Dolan received the marrow in January of 2013. Other than a few medical setbacks, the transplant was a success. She has returned to her job as a graphic designer at The Ohio State University.

Her timing couldn’t have been better. Cabral, who up until then kept his role in the transplant low key, was preparing to share their story during his ethics class the very next day. So, when Dolan emailed, Cabral emailed back. They agreed to meet. Dolan, her two sisters, mom, step-dad, and dad flew to Boston on Friday, Oct. 17, and drove to Manny’s aunt’s home. They wanted to say thank you.

“They welcomed us like we were family,” Dolan says. “There was an instant family connection. I just wanted to be able to say thank you. It has all been so surreal. It is like I am living in an augmented reality.”

Dolan and her family came bearing gifts. A baseball bat crafted by her dad, a sweatshirt blanket created by her mom, and the largest treasure, a book compiled and designed by Dolan using her infographic skills. The book is filled with more than 100 thank you notes written to Cabral from Dolan’s family, friends, and colleagues; thank you letters written by Dolan while she was undergoing treatment; photos of the bone marrow; detailed copies of her medical data; and even a family photo of them holding cards that spelled out “Thank you Manny.”

The book is both a chronicle of the bone marrow transplant as well as a vehicle for Dolan to try and understand the disease. It also offered her a way of taking control over her situation.

But most of all it is a thank you.

“I really wanted to show Manny that his decision didn’t just touch my life, but all our lives”

This was NECC’s second baseball alumni day. More than 17 alumni and their parents and families attended. Players from 2003, 2005, as well as members of NECC’s NJCAA Division III World Series teams of 2012, 2013, and 2014 attended.

“It was a wonderful day with a lot of memory sharing,” said Sue MacAvoy, NECC Athletic Director. “Everyone had a great time. The day ended with a BBQ. Current and former players sat together and shared stories.”