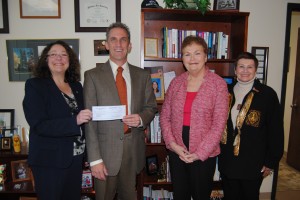 Executive director of HC Media Darlene Beal, NECC President Lane Glenn, Carol Verney, chair of the HC Media Board of Trustees, and Jean Poth, NECC vice president of Institutional Advancement are continuing their partnership. President Glenn accepts a $10,000 check from Beal that will be used to fund two scholarships.

For the third year, Haverhill Community Media (HC Media) will award two $5,000 scholarships to two graduates of Northern Essex Community College who are graduating with a focus on media communications and are continuing a four-year education at a four-year institution.

“We’ve had a really wonderful collaboration with Northern Essex for many years, and we’re thrilled to again offer this scholarship which will help local residents pursue their dreams,” says Darlene Beal, executive director of HC Media.

The most recent NECC students to receive these scholarships both graduated from NECC’s liberal arts: journalism/communication program in May 2014. Everson Taveras of Haverhill transferred to Emerson College and Matt Gingras of Amesbury is enrolled at UMass Amherst. Both students wrote for the Observer, NECC’s student newspaper.

Gingras says he has wanted to work in sports media for as long as he can remember. He worked as the sports editor of the Observer and is credited with turning the sports section into a robust, readable section. He went on to serve as the paper’s editor-in-chief.

Taveras, who graduated from the same program, also wrote for the Observer. He says his interest in a career in media stems from a desire to share information with people, particularly the truth.

The scholarships are not the only way HC Media is partnering with Northern Essex. For many years, NECC courses, such as Television Production and New Media, have been taught at HC Media’s Haverhill studios. The collaboration provides hands-on training on state-of-the-art equipment for NECC students as well as a steady stream of volunteers for HC Media.

Courses are taught by two NECC alumni—Matt Belfiore, ‘93, chief operations manager at HC Media, and Ray Naroian, ‘96, an instructor at NECC who is also the video producer at Haverhill Public Schools.

“It’s nice when you can link the different schools,” says Beal, adding that many volunteers start at HC Media as young as 12 years old, then go on to Haverhill High School and Northern Essex.

Beal herself is a graduate of NECC (‘89). She attended Northern Essex in her mid-20s unsure of what she wanted to study. After some experimenting, she fell in love with English and journalism, and went on to earn a scholarship and transfer to Boston University where she earned her bachelor’s degree in journalism. “If it wasn’t for Northern Essex, I never would have gone to BU,” Beal adds.

“The partnership with NECC is important because both HC Media and NECC share a belief in the value of education, want to engage our citizenry, and are committed to the community,” says Beal.

“Establishing a scholarship can be a very appropriate way of honoring an individual,” said Poth. “A scholarship also is a very effective way of giving back to the community since the great majority of our students are from the Merrimack Valley.”

To establish a permanent endowed scholarship, donors must make a minimum pledge of $10,000. For more information, contact Poth at 978 556-3624 or jpoth@necc.mass.edu.

Watch the HC Media video of President Glenn accepting the check from Carol Verney, HC Media chair of the board of trustees.