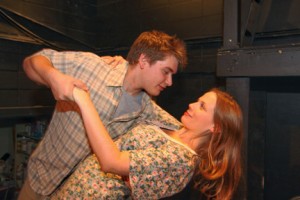 John Rodgers of Derry, NH and Hannah Heckman-McKenna of Salem, NH, will appear in the Top Notch Players’ production of “Front”.

England during World War II is the setting of the Top Notch Players’ fall production “Front” which will be performed November 7 & 8, and 14 & 15 at 7:30 p.m. November 13 at 4 p.m. and November 16 at 3 p.m. in the Chester Hawrylciw Theater on the third floor of the Spurk Building on the Haverhill campus.

Tickets are $10 for general admission and $8 for seniors and students. Tickets can be purchased at the door or through www.mvarts.info 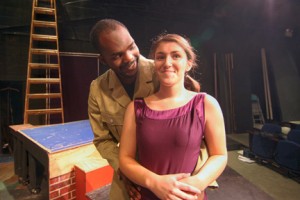 Trevon Gilchrist of Haverhill and Katie Formosi of Groveland appear in “Front” at NECC.

The story moves between various locations, in and around London and revolves around  a number of struggling individuals and families as they come to terms with war and the horrors and tragedies it provides. This includes Judith, a proud matriarch, who works in a factory that makes bomb detonators, her missing husband, Frank, and their two children, Angie and Tom, who are forced to grow up much too quickly. A number of other war-torn individuals are also profiled, each butting heads with the raging war.

This production will be directed by NECC theater professor Jim Murphy.