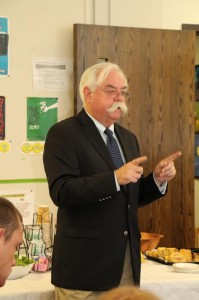 Rob Doherty, former executive editor of Foster’s Daily Democrat and 1973 graduate of Northern Essex Community College, returned on Wednesday, Oct. 22, to speak with Journalism and Communication students about his experience as a journalist, and how journalism has evolved into what it is today.

Doherty, a Vietnam-era veteran took his first journalism class at Northern Essex in 1971 because a friend told him it was an easy class. At the time, Doherty had no idea that journalism would become his career. “After three classes, a light bulb went off in my head,” he says. “I knew I wanted to be a journalist.”

During his time at NECC, Doherty and a group of friends started an underground paper named Mudflats Review. The paper was named after an unpaved, muddy parking lot at Northern Essex. His experience writing and editing Mudflats Review led to scholarships at Boston University.

Over the years, Doherty has had many professional accomplishments, including the prestigious Yankee Quill Award–presented annually by The Academy of New England Journalists–and induction into the New England Newspaper and Press Association Hall of Fame.  He retired from Foster’s Daily Democrat earlier this year after 33 years with the paper.

Soon after announcing his retirement, he wrote a column for Foster’s about his own educational journey titled “How a Community College Restarted a Life.”

Doherty spoke to students about how much journalism has evolved over the years. “I started as a reporter and the only thing I had to worry about carrying around was a pencil and paper. Today, you need to know how to get a story, take photos and videos, and be able to send it all from the scene.”

Doherty is a mentor to hundreds of college graduates who have become successful reporters and editors.

“Journalism is in good shape for the future” says Doherty. He is impressed with young journalists and feels optimistic about the next generation of editors.

NECC offers an Associate Degree in Liberal Arts with a journalism/communication option, which prepares students for transfer and for careers in print or broadcast journalism, including jobs with newspapers, magazines, publishing, television or radio.