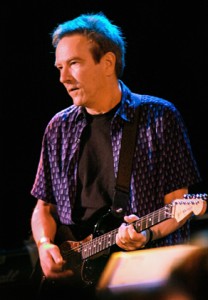 Los Angeles studio music scene veteran and Haverhill resident Marty Walsh will be the guest speaker of the Northern Essex Community College music department on Wednesday, November 19, at 1 p.m. in Room 220 of the Hartleb Technology Center on the Haverhill campus. This event is free and open to the public.

He will discuss various topics including recording session work, touring, the state of the music industry, and life as a contemporary professional musician.

A guitarist, Walsh has worked with some of the biggest names in the music industry.  In the early 1980s he worked on hits  “9 to 5” by Dolly Parton, “She Works Hard For The Money” by Donna Summer, the Oscar-winning “Arthur’s Theme” by Christopher Cross, and “Heartlight” by Neil Diamond.

He has also recorded with John Denver, Eddie Money, Kenny Rogers, Sheena Easton, and Julio Iglesias. In 1985 Walsh played guitar on the Supertramp album “Brother Where You Bound”, touring with Supertramp in 1985 and 1986. In 1988 he played on their 1988 release “Free as a Bird”.

In the late 1990’s Walsh recorded with Leann Rimes, playing on three of her albums including “I Need You.” More recently he can be heard on the Freddie Jackson single “Until The End Of Time, which topped the Billboard R&B charts at #1. This past June Walsh released his new instrumental album “The Total Plan” on Los Angeles-based Weberworks Records.

He is currently an assistant professor at Berklee College of Music in Boston.

NECC offers an associate degree in general studies: music and a certificate in music technology.