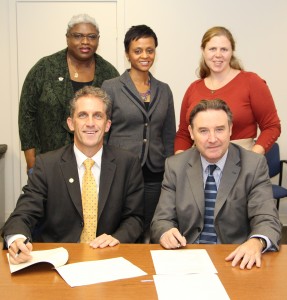 The University of West London’s impressive list of graduates includes musicians such as Pete Townshend of the Who, the late Freddie Mercury of Queen, and several recent finalists in the X Factor, England’s wildly popular television talent show. Soon, some Northern Essex Community College students may be added to the mix.

Northern Essex and the University of West London (UWL) recently signed an articulation and study abroad agreement, which will allow Northern Essex students to study for one or two semesters at the British university or transfer to the university’s bachelor degree programs after graduating with an associate degree from Northern Essex. The two colleges are also exploring opportunities for faculty and staff exchanges and online partnerships.

Located in the West End of London, which is the heart of London’s creative district, UWL is well known for its performing arts programs and also offers a large business school and degrees in criminal justice, liberal arts, art and photography, communications, and engineering. NECC and UWL have developed articulation agreements in all these areas, meaning after graduation from Northern Essex, students can transfer to UWL and earn a bachelor’s degree in two years.

A public university, the University of West London shares some similarities with Northern Essex, according to Chancellor John. “The majority of our students are first generation college students, and their biggest concern is finding a job after graduation.” According to the university’s website, 95 percent of their graduates are in employment within six months after graduating.

President Glenn said this new agreement fits well with the college’s interest in increasing global awareness, among students, faculty, and staff. “In today’s world, it’s incredibly important to understand diverse cultures and ways of thinking, which is why we are expanding our international programs and partnerships.”

NECC has been growing its international studies programs over the last few years, according to Marcy Yeager, interim director of NECC’s Cultural and International Studies Institute.

For more information on NECC’s new articulation agreement with UWL, contact Yeager at myeager@necc.mass.edu or 978 556-3326.