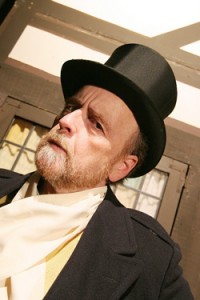 NECC theater Professor Jim Murphy will reprise the role of Ebenezer Scrooge during the 15th and final NECC production of “A Christmas Carol”.

For many, “A Christmas Carol” penned by Charles Dickens in 1844 is a quintessential Christmas classic, for anyone associated with the Northern Essex Community College’s adaptation of the beloved play knows it is a tradition…a tradition that after 15 years is coming to an end.

”We began seriously talking about ending it with the 10th version and have discussed doing so each year since,” says NECC theater professor Jim Murphy, who with his wife NECC professor Susan Sanders has made the stage magic happen each year. “The time has come. The end will be accompanied by a myriad of emotions and a flood of glorious memories.”

The curtain will drop December 14 on NECC’s final production of the classic that over the years Murphy and Sanders so cleverly cast with faculty, staff, students, alumni, and members of the community with Murphy himself often taking on the dialogue heavy role of Ebenezer Scrooge while directing the production. Each year, Sanders has overseen the set direction and costuming, as well as appeared in minor roles. Together with precision time-management, they have managed to execute the production in just three weeks.

“What happens at the end of those three weeks, in the span of two hours, is a gift to the community,” Murphy says. “It is pure magic. The story is simply told and advanced with the assistance of four Madrigal singers in a very intimate space.”

How did a simple holiday play become a tradition?

“In 1999, we thought it would be a one-time event. The initial year was a success on many levels …in October of 2000 Susan and I asked each other, “Shall we do it again?” A tradition and college ceremony was born,” says Murphy.

The “one-time” event was intended to be a department fundraiser for the college’s performing arts. The theatrical event took on a life of its own, attracting aspiring thespians from the classroom and the boardroom. And, just as quickly, it evolved into an annual, holiday affair that by Murphy’s estimation has cast hundreds in a play that has been viewed by thousands.

“I’d venture a guess that over the years we have delighted more than 4,500 audience members in our small theatre and involved close to 200 individual cast and crew members,” says Murphy. “It has been a great pleasure for so many people and an enjoyable ride for Susan and me.”

This year’s cast and crew of 40, like past years, is comprised of an eclectic mix of NECC students, alumni, faculty, staff, as well as their family members.

Each year, it has been performed in the 75-seat Chet Hawrylciw Theater on the third floor of the Spurk Building on the Haverhill campus, 100 Elliott St. This year, the final year, is no different. Performances will be held Friday, December 12, at 7:00 p.m., Saturday, December 13, at 2:00 and 7:00 p.m. and Sunday, December 14, at 2:00 p.m. Tickets are $10 for general admission, $8 for students and senior citizens and $5 for children 6 and under. Tickets can be purchased at the door.

The production is family friendly, he notes. A family of four can attend the production for less than the cost of one ticket to a larger regional production of the same play, he says.

“It is a very intense three weeks followed by an intense weekend. The camaraderie that develops among the cast members is wonderful,” says Murphy. “The audience sees and feels that energy.”

Girl in the Street –  Zoe Glenn

Ghost of Christmas Past – Sarah Bird

Man on the Street – Robert Mantegani