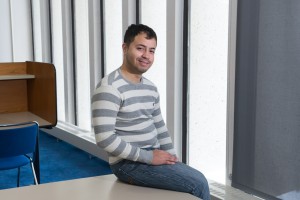 When Justin Merced of Lawrence enrolled at Northern Essex, he was interested in the academics, of course, but he also was looking for a full college experience. He wanted extra-curricular activities that would help him develop his leadership skills, meet other
students, and motivate him to stay physically active.

“I searched the Northern Essex website and found out what I could join,” he says. “One of the things that I appreciate most about Northern Essex is the amount of
activities offered to students.

”Since arriving at Northern Essex a year and a half ago, Justin served as vice president of the student senate; was the student representative on the All College
Assembly, an advisory board to the president; and ran weekly with the President’s Running Club.

An Army veteran who has served in Afghanistan and Iraq, Justin is also a leader in the college’s Veterans’ Club. Last fall, thanks in large part to his hard work, the college had a very successful Veterans’ Appreciation Day Luncheon.

Academically, Justin has excelled at Northern Essex, too, earning a near-perfect 3.95 GPA in his major, which is liberal arts with concentrations in biology and creative writing. He’s a member of Phi Theta Kappa, the community college honor society, and participates in the Honors Experience, a rigorous program for motivated students that’s affiliated with the UMass Commonwealth Honors Program.

Earning excellent grades is important if Justin is going to achieve his goals. After serving as a medic in the military, he decided medicine was the perfect fit for him career-wise. He plans to earn a four-year degree and eventually enroll in medical school.