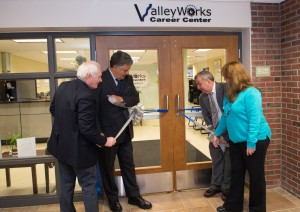 What was for years Northern Essex Community College’s bookstore is now the home of the ValleyWorks Career Center’s Haverhill Office. The college and the career center hosted a grand opening on Tuesday, Nov. 18 to show off the new space, which was renovated extensively by the college to fit the needs of the career center.

NECC President Lane Glenn opened the grand opening with a story illustrating why the partnership between the college and the career center make perfect sense.

On his way to the Hartleb Technology Center for the opening program, Glenn said he stopped by the career center and happened to meet a job-seeking client named “Tiffany.” When he introduced himself, “Tiffany” shared how excited she is about recent assessment tests that show she has an aptitude for math. “Tiffany” said she is now considering a career in accounting and planning to enroll in Northern Essex’s accounting program.

“Education is an option for many job seekers, and having the center located on our campus makes it easier for them to explore what Northern Essex has to offer,” he said. “I’m very glad you are here as neighbors and partners.”

When ValleyWorks announced in 2013 they would be closing the Haverhill location, which was located on Merrimack Street, due to budget cuts, Haverhill Mayor Jim Fiorentini pulled together a group including representatives from the college, the Workforce Investment Board, and ValleyWorks. “I knew we had to do something,” he said.

That’s when the partnership was born. The college was planning to move its bookstore, and would have space available on the first floor of the Behrakis One Stop Student Center but that space wouldn’t be available until the spring. In the short term, ValleyWorks offered limited services from space in the Hartleb Technology Center. The newly renovated space was opened for clients in June.

Rafael Abislaiman, executive director of the Merrimack Valley Workforce Investment Board, said that co-locating community colleges with career center is a national model that works. “I can’t imagine anything a better way to help people when they lose their job than to help them get the skills they need to apply for a new and even better one.” 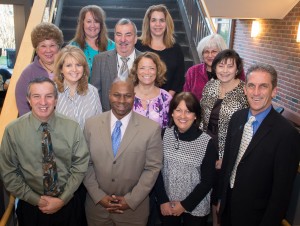 NECC President Lane Glenn poses with staff from the ValleyWorks Career Center which is now located on NECC’s Haverhill Campus.

The ValleyWorks Career Center is a one-stop career center, providing a wide range of services to job seekers and businesses in the Merrimack Valley. ValleyWorks also has a Lawrence site, located at 439 South Union St.

As part of the opening, the resource room in the new career center was dedicated to the memory of Ron DiNicola, the former manager of the Haverhill ValleyWorks, who died soon after retiring 2012. The plaque which was unveiled at the ceremony and will be placed in the resource room reads “inspiring leader, mentor, and friend to all.”

To learn more about the ValleyWorks Career Center, visit the website https://www.valleyworks.cc/