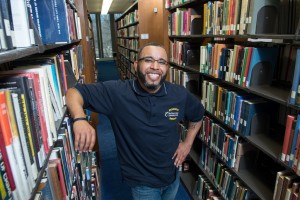 Carlos Vasquez says he received academic support from many areas of Northern Essex not the least of which was the tutoring center.

The 30-year-old Lawrence resident has been a steady visitor to the tutoring center since he began taking classes three years ago and credits it with helping him succeed. He is
targeted to graduate with a business transfer degree in December.

A native of the Dominican Republic, Carlos immigrated to the United States when he was just 9 years old and unable to speak English. He was a fast learner and attended Lawrence Public Schools where he says he was a good student. After graduating from Greater Lawrence Technical School with a focus on electronics, he entered the workforce working in a number of machine shops as a mechanical assembler.

He enrolled in college, but wasn’t ready to get serious about school.After working for several years, his attitude changed when Carlos realized more education meant more money in his paycheck.

At 27, he took a noncredit bartending course through NECC. While he never used his bartending skills, the course gave him the confidence to enroll in a credit course. Wiser
and more mature, one class led to two which led to three.

After earning a bachelor’s degree, he hopes to work for a nonprofit.