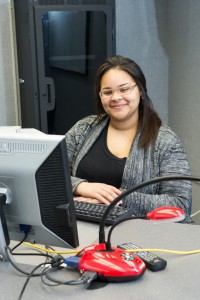 Nairoby Sanchez knew when she enrolled at Northern Essex that it would be the first step on her journey to earning a four-year degree.

The Haverhill resident was looking for a fresh start when she came to Northern Essex. After tumultuous junior and senior years in high school that included caring for a critically ill sibling and the death of her dad, Nairoby was ready for stability and direction.

“By the time I graduated from high school I was broken and didn’t know how to put myself back together,” she says.

She received valuable advice from her sister who was a 2012 graduate of NECC. “She told me to not let my personal life interfere with my academic life,” she says, “and I didn’t.”

Nairoby graduated in May with an Associate Degree in Liberal Arts: Political Science Option. She was accepted as a transfer student to George Washington University, UMass Boston, and Umass Amherst. She will attend UMass Boston where she received a full scholarship.

NECC was the right choice for Nairoby. “For the first time since third grade, I understood math,” she says.

These last two years, she says, have been transition years for her.

“I took my time there as the opportunity that it was … to make something of myself. I did that by getting involved,” she says.

She joined the NECC Student Senate, Amnesty International, and the Student Leadership Development Program. She was a work-study student in the student engagement center. But now, she is ready to transfer.

“I feel Northern Essex has more than prepared me to transfer,” she says. “Incoming students should take a good look at what NECC offers. It has so many resources available to its students. You just have to look around and ask.”