Marine Biology has this Professor’s Heart 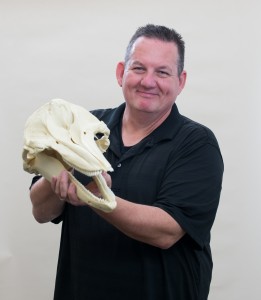 If he isn’t on the water or in the water, then marine biologist and natural science professor Dr. Ken Thomas is teaching about the water and its countless inhabitants.

While he also teaches introduction to biology and human biology, marine biology has had his heart since he was a boy on family trips to the beach.

“I was the one poking around the rocks, digging in the sand, and sieving the water just to see what was living in there,” he says.

What he found, in addition to marine life, was a lifelong interest. A young follower of “The Undersea World of Jacques Cousteau,” he was inspired by Cousteau to pursue a field of study that would satisfy his intellect.

An expert canoer, sailor, and swimmer, bodies of water are his playground as well as his office.

“Marine biology is exciting because we are always finding out new things about old, familiar organisms, as well as discovering organisms we didn’t know existed,” he says.

These new discoveries keep old material fresh in the classroom and keep the students engaged.

“I like to challenge my students to think for themselves…to question and investigate what we think we know, and to make their own decisions based upon their interpretation of evidence,” he says.

He is a satisfied professor, he says, when his students have an epiphany regarding the class material.