She Examines and Explores Criminal Justice 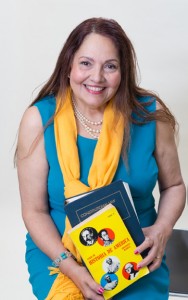 Lessons in criminal justice came early to NECC Professor Magdalena Suarez-Shannon whose childhood soundtrack was of gunfire in the streets of her native Cuba.

Suarez-Shannon was just a little girl when her family fled Cuba when, she says, there was a complete deterioration of government and laws under Fidel Castro.

The Portsmouth, NH, resident brings this not-so-distant history and all its implications and complications into her Northern Essex classes where criminal justice and its relevance in today’s society is examined and explored.

Losing her home and her homeland to unlawfulness made a deep impression on the young Magdalena whose uncle was a police officer of considerable rank when he was arrested by the revolutionaries and barely spared the firing squad.

In addition to sharing her living history with her students she carries her many years as a student which she considers her first, formidable career.

“It is through trial and error and blood, sweat, and tears that we forge the path of our future life. Being a student is a time of reflection, anticipation, and speculation,” she says.

As an educator, she says. she feels fulfilled when students are engaged.

“When students transition from indifference to enthusiasm in any of the courses I teach I feel that I have succeeded,” she says.

“Who could have guessed that criminal justice programs would, one day, need to offer comprehensive classes in combating international and home grown terrorism?” she asked.

Prior to coming to NECC four years ago, she was the director of the Outreach Center at Harvard University for eight years. She developed and led the program, which is still used today, to familiarize Boston and Cambridge youth with the college environment.

Northern Essex offers a certificate in law enforcement and an associate degree in criminal justice.  To learn more,  visit the Criminal Justice Program on the website.