Eighteen Haverhill High School seniors already have 27 college credits, even though they won’t graduate from high school until May.

These students have been participating in the Haverhill Early College Program, a partnership between the high school and Northern Essex Community College.

Students in the program earn both college and high school credits for courses taken during high school. Courses are taught at the high school by college professors and high school teachers qualified in the discipline, and include classes such as English Composition, U.S. History I and II, American Literature I, and Introduction to Psychology. Students complete the program with 27 credits and can take additional college courses on their own, graduating with 30 to 36 credits or over a year of college. The credits earned from Northern Essex are transferable to other colleges and universities. 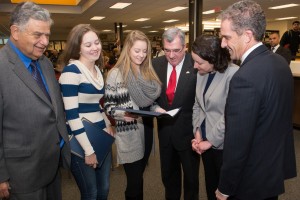 On Tuesday, January 6, the high school celebrated these motivated students with a graduation ceremony in the high school library. The ceremony included remarks by James Scully, Haverhill superintendent of schools; Beth Kitsos, Haverhill High School principal; James Fiorentini, Haverhill mayor; Lane Glenn, president of NECC; and Kathleen O’Connor Ives, state senator. The 18 graduating seniors and their parents as well as the 36 juniors who are currently enrolled in the program attended the event along with city, college, and high school administrators.

“These students learned that working hard and sticking with it pays off,” said Mayor Fiorentini in his remarks. “The college credits they’ve earned can be applied to any public college or university in the state and just about any private school.”

The program helps make college more affordable, according to President Glenn—who asked anyone who was concerned about the cost of college to raise their hands—and also ensures that students don’t require developmental courses once they enroll in college.

Principal Kitsos explained that the program was started four years ago with a small co-hort of nine students. The second year the program doubled in size to 18 students and the junior class has 36 students enrolled.

Kitsos said that she has seen MCAS scores increase as a result of the program and student confidence levels rise as well.

Senator O’Connor Ives is a champion for Early College Programs and, as a result of her advocacy, four local high schools—Haverhill, Amesbury, Newburyport, and Methuen—shared $175,000 in funding to support these programs earlier this year.

“This is precisely the type of programming that should be offered to every high school student,” she said. It prepares them for college, saves them money and builds confidence in those that may think they are not college bound.”

Kayleigh Bergh, one of the graduates, plans to spend the second semester of her senior year taking additional courses at Northern Essex in addition to her high school work. She says she was “nervous” to start college work as a sophomore but had the “best year ever”, claiming “it’s nice to know that college professors can be fun and open.” Bergh plans to transfer to UMass Lowell or UMass Amherst and major in computer science. Eventually she’d like to pursue a career in computer forensics. 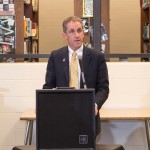 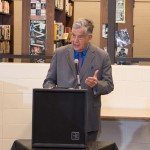 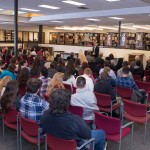 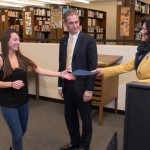 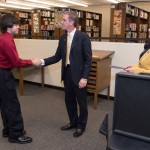 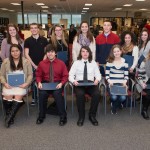 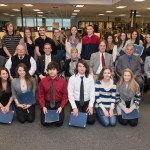 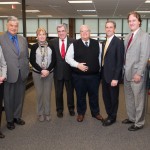 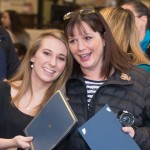