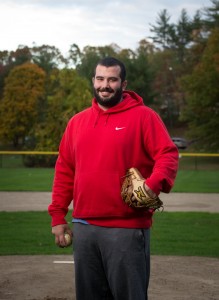 Daniel Peters found that Northern Essex was the best place for him to balance farming, fastballs, first-graders, and the fundamentals of a college education.

“NECC taught me how to use my time wisely especially while playing baseball. It taught me how to manage time effectively by balancing school and sports and that it pays off later in the semester and life when you have to balance multiple things in your life,” he said.

The 2012 graduate of Salem High School says NECC gave him the opportunity to play baseball while searching for his academic direction. His interest in teaching was confirmed when, as part of his studies, he observed classes in the Soule School, which he attended as a boy.

The brawny six-footer found himself as at-home in the first-grade classroom as he was in the fields of his family’s farm. “I find (first-graders) are really eager to learn at that age and participate in activities,” he says.

A fourth-generation vegetable farmer, Daniel says teaching will give him the flexibility to work alongside his relatives caring for the crops at Peters’ Farm during the summers. Northern Essex, he said, was instrumental in helping him create his life plan.

At NECC Daniel was known for his 80-plus mph fastball. He helped the team go to the NJCAA Division III World Series two years in a row. He was named the NECC Male Athlete of the Year for 2014 by the college.

“I may not throw the fastest fastball, but my accuracy makes me successful,” he says.

He graduated with a 3.6 GPA and received the NECC Excellence Award in Elementary Education.