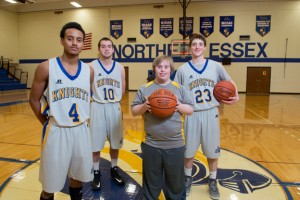 One of the hardest working members of the Northern Essex Community College Knights Basketball Team may never have scored a point for the team, but he scored plenty of points with the team and its fans this season.

Twenty-three-year-old Brett Hanley of North Andover, a client at Opportunity Works, an adult day program located in Newburyport and slated to move to its new building adjacent to NECC, was hand-selected by the team to serve as the first, volunteer- assistant to NECC Athletic Director Sue MacAvoy under a new partnership titled Opportunity Knights. 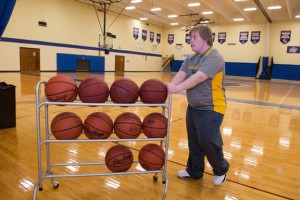 Brett rolls the basketball rack onto the court in preparation for the NECC home game.

Two hours before each of the 12 home Knights’ games, as the players filtered into the Sport & Fitness Center for their pregame warmup, Brett, wearing a gray and blue and yellow NECC t-shirt, could be found performing his own drills – rolling out the basketball cart, setting up

chairs, filling the coolers with water and ice, sweeping the floor, and greeting players and fans.

“He just loves it,” said his father Ted Hanley of his son Brett who has Down’s Syndrome. “He looks forward to working every game. If he could sleep in his uniform he would.”

The volunteer position was perfect for Brett, his father said, because it wove together several of his interests – basketball, people 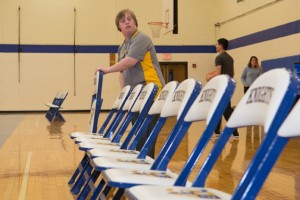 and being a helper.

“He has been a good ambassador for the school,” Hanley said.

Brett, who his father characterizes as fiercely independent, isn’t one to sit around. He attends a knitting group, sings in a treble chorus, plays the drums, and listens to Christian music.

MacAvoy says scoring Brett as her assistant was a win for the entire team. 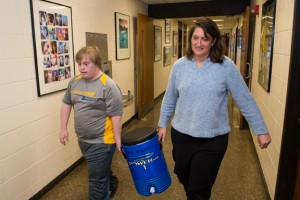 “It’s been really great to see how the student athletes are with him and how he is with them,” she says. “He always has a huge smile on his face which makes all of us smile. Brett makes everyone’s days better.”

Bryan Centeno, 21, who is a member of the basketball team, echoed MacAvoy’s sentiment. The movement science major says the team selected Brett from a field of three or four candidates because of his energy and attitude.

“There was an excitement when he walked in the room,” said Centeno. “He walked in and was well dressed wearing a big smile…we liked his energy.”

In the future, NECC hopes to employee an Opportunity Knights volunteer for each of its sports teams according to MacAvoy.