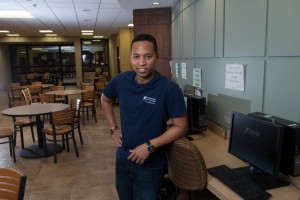 When Joanel Vasquez emigrated from the Dominican Republic four years ago, he dreamed of attending college and earning a four-year degree. Northern Essex gave him the opportunity to achieve his dream.

The Lawrence resident says his interest in math led him to the Engineering Science Program at NECC, a major that gave him both a foundation for a high-demand field as well as a degree that transferred seamlessly into the mechanical engineering bachelor’s degree program at UMass Lowell.

“Being a student at NECC better prepared me to transfer to UMass Lowell,” he says.

Attending college in a new country was no easy feat for the now 22-year-old Joanel. In addition to learning a new language, he discovered how to balance his classes and studying with working so he could support himself.

“I’m really glad I started at NECC. The environment was exactly what I needed in order to get good grades and transfer. The classes are small, so you get to know your professors,” he says.

Once he started his college career, Joanel was all in, becoming a tutor for students who needed extra help in math, physics, chemistry, and computer science. He found he enjoyed teaching others and remained a tutor even after graduating from NECC in 2014 with his associate degree in engineering science.

As a first generation college student, Joanel took advantage of the workshops offered through the Pathways to Academic and Career Excellence (PACE) Program. “PACE helped a lot … any questions I had about transferring were always answered,” he says.

Joanel was also a member of the honor society Phi Theta Kappa (PTK). He received scholarships from both PACE and PTK.

Joanel hopes to one day earn a Ph.D. in engineering.