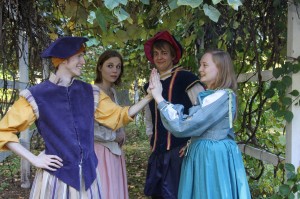 Matthew Lundergan of Raymond NH, Samantha-Wheatley of Lowell, (rear) Hannah Heckman-McKenna of Salem NH, and Paul Kelly of Derry NH appearing in Much Ado About Nothing in November 2013.

KCACTF is a national theater organization that recognizes excellence in university and college theater programs. In January and February of each year, the program hosts eight regional festivals for over 600 schools in order to showcase the nation’s most exceptional undergraduate productions – all of which are subject to a number of activities and award opportunities. Students are selected to compete in the festival by nomination and are critiqued by renowned theater professionals. The Region I festival, held in Hyannis, Massachusetts, attracts approximately 200 students from New England and New York. Only 36 advance to the semi-final rounds and a mere 16 move on to the nationals.

Among those participating and advancing in this year’s festival was Lowell resident Samantha Wheatley, an NECC alumna and current Fitchburg State student who was nominated for her role in Fitchburg’s production of “The Importance of Being Earnest.” Following a viewing of the production, a representative of the festival invited her to take part in KCACTF’s Irene Ryan Acting Scholarship Audition for outstanding performers, through which students are invited to compete for a $500 scholarship and a tentative spot in the national festival. Wheatley was selected for the semi-final round of the competition for her acting abilities.

Also participating this year was Matthew Lundergan of Raymond, New Hampshire, who competed for NECC using a one-act play he had developed in Professor Susan Sanders’ Directing 113 course. Lundergan was recommended for the program’s Student Directing Initiative (SDI) after a KCACTF representative viewed a Top Notch Players performance of his play. At the festival he chose to direct a scene from Samuel Beckett’s Absurdist play “Endgame,” recruiting NECC students Robert Mantegani, Jonathan Gray, and Coty Lennon-Markee to play the necessary acting roles. The play was selected for the next competitive round. Lundergan is now enrolled at Salem State University.

The Liberal Arts: Theater Option at Northern Essex Community College offers students the opportunity to explore and take part in the many aspects of theater, including acting, directing, designing, and playwriting. Please visit www.necc.mass.edu to learn more about the program or view upcoming performance dates.