Marguerite Momplaisir believes Northern Essex’s Respiratory Care Program trained her for the career she was meant to have. 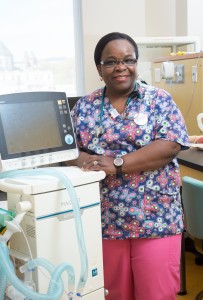 She graduated in May 2014 with an associate degree in respiratory care long after earning other educational credentials and working in the business world.

“I have always been interested in health care,” she says. “My degree from Northern Essex allows me to work in the field in a job I love.”

A native of Haiti, Marguerite immigrated with her family to the United States shortly after her high school graduation. Her dream of attending medical school was halted with the sudden death of her father. Instead, she earned two business-related certificates and returned to Haiti where she married her high school love. Together they later returned to the U.S. where they raised their twin boys and daughter.

After the three children were educated, Marguerite decided it was time for her to pursue her own education. She earned a bachelor’s degree in human services from Merrimack College. For more than 20 years she worked as a human resources manager. When she lost her job, she made the loss her gain by enrolling at NECC.

For too long she had pushed aside the idea of pursuing a degree in health care. It was time, she decided, to make an action plan. She explored the Respiratory Care Program and eventually enrolled. Marguerite, an honors graduate, served as a learning peer mentor at NECC, was the treasurer for the Respiratory Care Club, and volunteered at Cor Unum Meal Center in Lawrence and Emmaus House in Haverhill. She continues to work in the NECC Tutoring Center despite the fact she has a permanent, per-diem position at a Boston hospital.

In addition to earning her degree in respiratory care, Marguerite also earned an associate degree in business management.