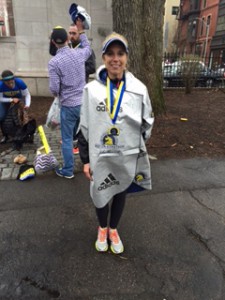 Congratulations to NECC’s very own Boston Marathoners Maria Gonzalez of Burlington who works as an academic advisor and student success center liaison on the Lawrence campus and Linda Desjardins of Hampton, NH, who taught English for 39.5 years before retiring last December.

Gonzalez ran the iconic race with a 4:07 time. This was her fourth marathon and the second time she ran Boston. The 44-year-old ran her first road race when she was just 10 and has been running ever since. Her first Boston Marathon was 11 years ago.

She has worked at NECC for the last 3.5 years.

“I hope to run in more marathons and other shorter distance races for as long as possible- hopefully for many more years,” she says.

She routinely runs with the Shamrock Running Club.

“Running marathons reminds me of what’s important in life. You have to set and achieve goals, pay attention to your body and mind, adjust to unexpected challenges, have positive people in your life, be resilient, and enjoy the journey (not just race day),” Gonzalez says. 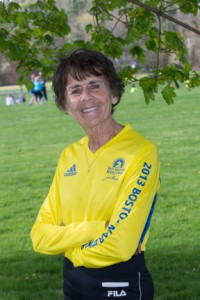 This was Desjardins’ eighth Boston Marathon and 16th marathon overall. The 67-year-old completed the marathon in 4:48. While she had been hoping to come in under 4:30 she isn’t disappointed as she has already run a Boston Qualifier and is all set to run next year’s Boston Marathon.

Desjardins began running at the age of 30 in 1978 and ran four marathons in her early 30’s – two of which were Boston Marathons, back when her qualifying time needed to be under 3:20. She tired of racing and stopped entering races for the next 30 years, though she continued her daily runs.

“I entered a race on a whim in 2008 when I was 60, and to my surprise won my age group.  Mike Pelletier (a retired NECC engineering professor) asked me to run for his club, the North Shore Striders and I kept saying no.  He convinced me to be part of a relay team for them and I was hooked again, “she says.

Linda will run the NECC Campus Classic for the third time on May 2.