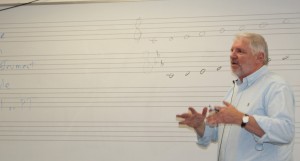 NECC Alumnus David Vose, who has had a successful career as a musician and professor at Berklee College of Music, credits Northern Essex with starting him on his academic and professional journey.

“They played popular music that was powerful and potent,” he said demonstrating drum line drumming with drum sticks on the closest desktop.

Along with the British Invasion in the 60s came a distinguishable rock beat, he said. This prompted Vose to join a rock band.

When he heard an upper classman had been accepted to Berklee College of Music in Boston, he researched the Boston institution and started to think “I should go there”.

Because he had spent so much time on sports and music, Vose said his grades were not Berklee-ready when he graduated from Methuen High School in 1967. He applied to the then fledgling Northern Essex, was accepted, and attended for two semesters taking NECC classes held at the Greenleaf School, Bradford Grange, and former Haverhill High School.

“I appreciate everything this college offered me,” he said. “I can’t say enough how valuable Northern Essex was to my life. I can remember thinking, ‘This is incredible. I’m in college preparing for my life.’ ”

He strongly credits Northern Essex with teaching him good study habits and building his academic confidence.

Vose said these confidence boosters helped him get serious about his music. He became absorbed in private piano and music theory lessons. These lessons, in turn, taught him he needed a “strong work ethic” to succeed.

Once he was accepted to Berklee, he financed his education by pumping gas until midnight, giving drum lessons, playing in a band and tutoring.

“If I had a break during a gig, I wasn’t on break, I was reviewing my homework assignments,” he said.

Following graduation he toured with The Drifters (Under the Board Walk) and Freddie Boom Boom Canon (Palisades Park). When he returned to Boston for graduate studies he visited Berklee to see a friend and was offered a teaching position. Over the decades, he has taught ear training, scoring for percussion, marching band methods, and private studio.

In those early days he played in wedding bands and theater pit orchestras. Today, Vose’s teaching days are winding down, but he continues to play in a rock band, jazz band, and patriotic march ensemble.

Vose is a member of the Massachusetts Educators’ Hall of Fame. He has served as a clinician for Grover Percussion, Zildjian Cymbals, and Yamaha Corporation of America. He has presented at the Ludwig International Percussion Symposium, the Texas Music Educators Conference, and at numerous publishing companies with arrangements appearing in Kendor, Belwin Mills, and Columbia Pictures Productions.

The lifelong Methuen resident recently relocated to Cape Neddick, Maine with his wife who, as luck would have it, was in his NECC Economics class back in 1967.

NECC offers an associate degree in General Studies: Music Option which prepares students for transfer to a four-year institution.