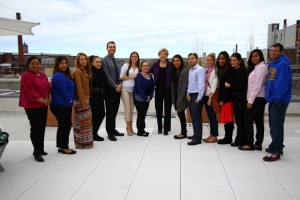 Forty percent of college students who are eligible for Pell Grants—federal aid that is awarded based on financial aid—don’t apply for them, according to U.S. Senator Elizabeth Warren.   The senator was in Lawrence visiting Northern Essex Community College’s Dr. Ibrahim El-Hefni Allied Health & Technology Center on Friday for a student forum on college affordability.

Senator Warren urged the 15 NECC students who attended to “encourage their family and friends to apply for Pell Grants.”

College affordability has been a priority for the senator who has supported initiatives such as increasing funding for Pell Grants and lowering the interest rate on college loans.

Three of the NECC students attending the forum shared their personal stories, detailing how they are paying for college.

Kevin de Carvalho, a criminal justice major from Haverhill, started at Massasoit Community College after graduating from high school.   His first semester he received a Pell Grant but he didn’t qualify his second semester.  As a result, he had to increase his work hours and didn’t do as well academically.  Seeing how he was struggling to balance college with working more than fulltime, his older brother invited him to move to Haverhill and live with him rent-free.  This was life-changing for de Carvalho and he will graduate this month from Northern Essex with high honors and plans to transfer to Fitchburg State College in the fall.

Jessica Castillo of Lawrence emigrated from the Dominican Republic when she was 18 years old, speaking no English.  She enrolled in ESL 1 at NECC and worked three part-time jobs to support herself, along with taking out loans.  While a student in the Business Management: Health Care Practice Program, she landed a full-time job as an office manager with Dental Dreams in Lawrence.  With the help of loans, she is continuing her education online at St. Joseph’s College in Maine, pursuing a bachelor’s degree in management.  She will also be receiving her associate degree this month.

Kiara Pichardo is a 2012 graduate of Lawrence High School who chose to attend Northern Essex because it was affordable and close to home.  She has received Pell Grants to cover her tuition and fees and also works a part-time job to support herself while enrolled in the Liberal Arts: Theater Option Program.  After graduating this month from NECC with honors, she will transfer to Fitchburg State College, where she will major in theater.  Pichardo is anxiously waiting to receive a financial package from Fitchburg State.  “Fitchburg State costs more than Northern Essex.  I’m hoping for a good package.”

Based on a question from NECC Business Transfer student Kayla Mignanelli asking how she paid for college, Warren shared her own story which was similar to those the students shared.   Warren, who grew up in Oklahoma with four older brothers, came from a working class family where money was very tight.  She knew she wanted to be a teacher and, based on affordability; choose a commuter college close to home that costs $50 a semester.  She says “it opened a million doors for me…I grew up in an America that was investing in their kids.”

Warren is a proponent of community colleges and congratulated students for making a good financial choice.  “Northern Essex is one of the best educational bargains in the state.  You are here at a great college building a great future for you and your families.”

In addition to the student forum, the senator had a tour of the El-Hefni Center, a state-of-the-art facility for preparing health care workers, and learned about plans for the city, including improvements to alleyways adjacent to the El-Hefni Center that are being undertaken now with state funding that the city received. 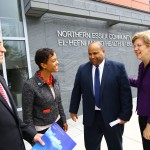 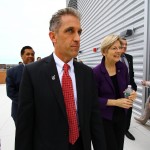 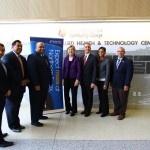 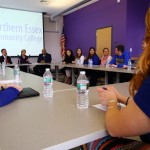 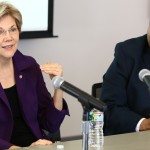 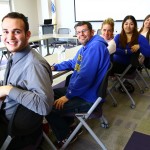