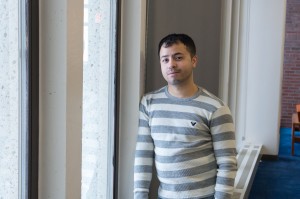 Justin Merced of Lawrence, a Liberal Arts Major, Writing Option, has been selected as student speaker for NECC’s 2015 Commencement

Justin Merced of Lawrence, who is graduating from Northern Essex Community College with a Liberal Arts Degree, Writing Option, has been selected as the student speaker for the college’s 53rd Annual Commencement Exercises, which will be held on Saturday, May 16.

After graduating from Lawrence High School in 2006, Merced joined the U.S. Army, where he trained to be a medic.  He proudly served in both Iraq and Afghanistan, and, after leaving the service, he decided to begin his college education in the health care field, a decision that was the result of his experiences during the war.

Merced says that the military was one of the best choices he could have made, bringing discipline and structure into his life.

While a student at Northern Essex, Merced has maintained his connections with the military.  He rejuvenated the college’s Veteran’s Service Club and in November of 2013 he provided the leadership for a Veteran’s Day luncheon which 50 veterans, including college faculty and staff and students, attended.  Based on its success, the Veteran’s Day Luncheon has now become an annual event.

In addition to his involvement with the Veterans’ Club on campus, Merced has been vice president of the student senate; served as the student representative on the All College Assembly, an advisory board to the president; and run weekly with the President’s Running Club.

Academically, Merced has excelled at Northern Essex, too, earning a near-perfect 3.95 GPA in his major, which is liberal arts, with a concentration in writing.  He’s a member of Phi Theta Kappa, the community college honor society and participates in the Honors Experience, a rigorous program for motivated students that’s affiliated with the UMass Commonwealth Honors Program.

Merced plans to attend Rutgers University in the fall where he will major in biology/premed.  After graduating with his bachelor’s degree, he plans to attend medical school, and eventually settle in Massachusetts as a physician in the field of Emergency Medicine (EM).

Over 1,000 graduates will receive certificates and associate degrees at the college’s 53rd Annual Commencement, which will be help on Saturday, May 16 at 11 a.m. on Northern Essex’s Haverhill Campus.