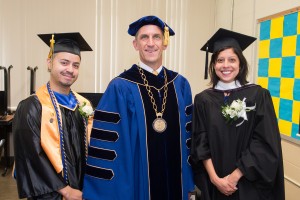 Over 1,300 associate degrees and certificates were awarded at Northern Essex Community College’s 53rd Annual Commencement Exercises which were held on Saturday, May 16th in the quadrangle on the college’s Haverhill Campus.

Because Saturday was Armed Forces Day, NECC President Lane Glenn asked the 20-plus graduates who were veterans or military service personal to stand and be recognized.

“Our veterans keep us safe so we have the freedom to pursue our dreams,” he said.

He also shared the stories of three veterans who are members of the graduating class including Chuck Grandmaison of Haverhill, a Vietnam veteran who received his Associate Degree in Human Services and a Drug and Alcohol Abuse Counseling at the age of 67; Jeff Rhoades of Lawrence, a veteran of Kuwait and Afghanistan, who received associate degrees in electronic technology and computer networking; and Nicole Catanzaro, an Iraq veteran, who earned an engineering degree and is transferring to UMass Lowell to study biomedical engineering.

The featured speaker was Helen Ubiñas, an award winning columnist with the Philadelphia Daily News, who is a former editor of the Observer, NECC’s student newspaper, and attended the college in the early 1990’s.

The theme of Ubiñas’s speech was “Your voice matters!”

“I’ve been privileged to have a platform to share my voice at two newspapers.  But the great thing about living in today’s world is that everyone has an outlet for his or her voice, and that everyone can help magnify other voices.  You don’t have to be a columnist to bring attention to a cause or an injustice.  You have the power, and technology, in your hands to help change the world—right now.”

“You will choose careers and paths that fit your interests and talents, she said.  “But in whatever you do, the value of your lives will be measured in the difference that you make in the lives of others.”

Here’s a link to Ubiñas’s speech.

Justin Merced, the student speaker, graduated from the college’s Honors Experience with an Associate Degree in Liberal Arts, Writing Option.   He served as a medic in the Iraq War and, as a result of his experiences, plans to be a doctor.  He will transfer to Rutgers University in New Jersey in the fall where he will major in pre-med. 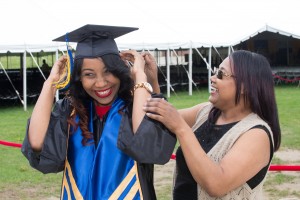 NECC graduate Jessica Castillo of Lawrence gets help with her graduation cap from her mother Ascension Vasquez of Lawrence.

Merced encouraged graduates not to let fear hold them back.  “Progress should be our watchword.  Not fearing failure or success, or even spiders or heights or the ocean, but featuring standing in one place for too long.  If you know what you care about, you can determine what you want to accomplish, and once you accomplish it, continuously build and improve upon it—like a game of Tetris or Jenga, except more possible to win.”

Here’s a link to Merced’s speech.

The commencement proceedings opened with the national anthem sung by NECC student Carli Hamilton of Plaistow, N.H., who will transfer to Berklee School of Music.

Alumna Susan Bonefant, who is chairperson of the NECC Alumni Association, presented the Outstanding Alumni Award to Helen Ubiñas, the commencement speaker.

Here is a link to the photos of the ceremony.