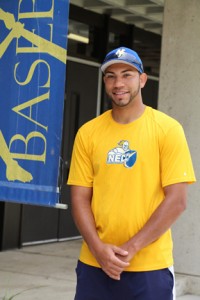 NECC’s assistant baseball coach Jhonneris Mendez had more to celebrate last weekend than the Knights heading to the NJCCA World Series. Just a few days before, on Thursday, May 7, he, along with more than 350 immigrants, was sworn in as a United States citizen at Faneuil Hall in Boston.

His citizenship was a longtime coming for the 24 year-old Dorchester resident. He arrived in the United States when he was just two-year-old when his mom moved here from the Dominican Republic. They spent a few years in New York before settling in Boston.

Mendez attended Boston schools, graduating from Boston English High School and enrolling at Suffolk University where he played forward on the basketball team and was a pitcher on the Division III baseball team. When Mendez graduated from Suffolk in May of 2014 with a bachelor’s in sociology, he realized he needed his citizenship to complete his American dream.

While Mendez was studying to take his citizenship test, his former Suffolk baseball coach Jeff Mejia, who is now head coach at NECC, encouraged him to apply for the assistant baseball coaching position at Northern Essex.

“It has been an awesome experience,” he says. “They are an exceptional group. And, I love the energy of being on the field again. I’m experiencing baseball from the other side of the field.”

When he isn’t at the NECC baseball field with the Knights, Mendez can be found at Earl’s Kitchen & Bar in Somerville where he is a bartender and manager. His recent coaching experience however has him thinking about additional coaching opportunities.

For the fourth consecutive year, the Northern Essex Community College Knights baseball team will head to the NJCAA World Series.

The Knights will join seven other junior colleges in Kinston, N.C., from May 23-29 for the NJCAA World Series.

The Knights boast a winning streak of 23 consecutive games dating back to March 18.