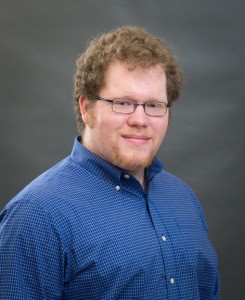 Samuel Beverage of Lawrence has been elected the student representative to the Northern Essex Community College Board of Trustees.

A graduate of North Atlantic Regional High School, a program designed for home-based education, Beverage, 19, began taking classes at Northern Essex on a part-time basis when he was just 15-years-old.

He is scheduled to graduate in May 2016 with an Associate in Science degree in Computer Engineering.

Beverage has been heavily involved in campus life since enrolling at NECC. He was a member of the Student Senate and Student Leadership Program, served as a presidential student ambassador, worked as a math tutor and supplemental instructor for chemistry, and completed the Honors Program. He also played intramural football.

“What I like about Northern Essex is that it really is a complete college campus,” he said. “There’s a lot to do and there are lots of interesting people to meet. I’ve never had any difficulty finding something to do on campus.”

Beverage says he was drawn to the role of student trustee because he has enjoyed being involved with campus activities and wants to continue to be involved as the college moves toward the upcoming Haverhill campus renovations.

“I want to see that the school continues to be all that is has been for me, for new incoming students,” he said.

The NECC Board of Trustees includes nine members who are appointed by the governor of the state to a maximum of two five-year terms as well as an alumni-elected member, who also serves a maximum of ten years, and a student trustee who serves for two semesters. Beverage will serve for 2015-2016.