NECC Gallery is Named in Honor of Boxford Woman 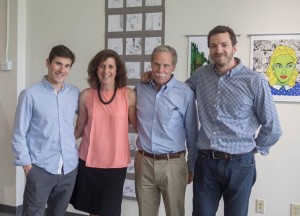 The gallery in the Bentley Library on Northern Essex Community College’s Haverhill Campus is a small jewel of a gallery that features student and faculty art as well as the work of new and established artists from across the region in a series of exhibits that change regularly.

On Friday, May 15, the gallery was renamed the Linda Hummel-Shea ArtSpace in honor of the college’s recently retired assistant dean of libraries at a ceremony and reception attended by the Northern Essex community as well as Hummel-Shea’s family and friends.

According to Mike Hearn, the college’s director of libraries, Hummel-Shea, a longtime resident of Boxford, was a major force behind the creation of the gallery.

“Linda had a vision to provide a space for faculty, staff, and students to showcase their work, and it was through her tenacity that the ArtSpace was created.”

Also speaking at the dedication were Lane Glenn, president of the college, Bill Heineman, vice president of academic and student affairs, and Marc Mannheimer, professor of art.

Hummel-Shea began her 35-year career at Northern Essex as a part-time evening services librarian. When she retired last June she was assistant dean of libraries.

During her tenure, Hummel-Shea provided leadership at a time when libraries were undergoing tremendous changes in response to new technology.

She arrived at Northern Essex during the era of the card catalog and when she left the college’s libraries were completely digitalized with the great majority of materials accessible online.

She also was integral in creating the college’s second library in Lawrence, building a facility that has successfully supported the students and faculty in Lawrence, especially those in health care, criminal justice, and paralegal studies.

While Hummel-Shea is a lover of books and the printed word, she also recognizes that libraries have an expanded mission, including serving as community and cultural centers, which is why she was so passionate about creating the gallery.

At the college’s commencement on Saturday, May 16, Hummel-Shea received emeritus status, an honor that recognizes sustained excellence in performance, character, and meritorious service to the college.

Opened in 2009,  the ArtSpace gallery has featured an impressive collection of artists over the years from sculpted carousel animals by Jeffrey Briggs of Newburyport to the graffiti inspired art of Jeff Henriquez of New York, New York.

To learn more about the Linda Hummel-Shea ArtSpace, contact Mike Hearn, NECC director of libraries, at mhearn@necc.mass.edu or 978 556-3423. 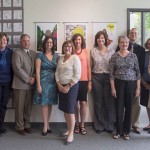 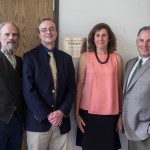 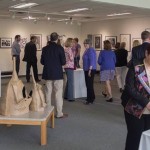