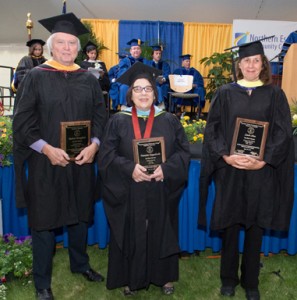 Three members of the Northern Essex Community College faculty and staff, Michael Broughton of Plaistow, N.H., Francine Pappalardo of Salem, N.H., and Linda Hummel-Shea of Boxford, received the title of emeritus during the college’s 53rd annual commencement exercises on Saturday, May 16, on the Haverhill campus.

At Northern Essex, the rank of emeritus is an honor that recognizes sustained excellence in performance, character, and meritorious service to the college. Emeritus status is given to a retired college employee based on recommendations by the college’s emeritus committee and approved by NECC President Lane Glenn.

Broughton started teaching at Northern Essex nearly 35 years ago when the field was still in its infancy. Over the years he has taught computer software and hardware courses along with math to thousands of NECC students. He also taught employee groups including Lawrence Public School Teachers and employees of the Internal Revenue Service in Andover.

He was the chair of NECC’s inaugural college-wide information technology committee. Under his leadership the committee focused on the college’s software and hardware needs.

As Bill Heineman, vice president of academic and student affairs wrote, “The committee quickly became the “go to” place for discussion and debate on information technology issues at the college.”

President Glenn credited Broughton with keeping current in an ever changing field and sharing his knowledge with the entire college community.

He was named Professor Emeritus of Computer Information Science.

When Northern Essex assumed governance of the practical nursing program from Greater Lawrence Regional Vocational Technical High School in 1982, Pappalardo oversaw the newly acquired program, which flourished and quickly developed a reputation for high retention rates and exam success for its graduates.

She was named Professor Emerita of Nursing.

Hummel-Shea began her 35-year career at Northern Essex as a part-time, evening services librarian. When she retired in June of 2014 she was assistant dean of libraries.

During her tenure she provided leadership when libraries were undergoing tremendous changes in response to new technology. She arrived during the era of the card catalog and left when the libraries were completely digitalized. She was integral in creating the library on the Lawrence campus.

While she is a lover of books, Hummel-She recognizes that libraries have an expanded mission of serving as community and cultural centers. She championed the ArtSpace Gallery, which showcases the work of students, faculty, and visiting artists. The ArtSpace was recently named after her.

She was named assistant dean emerita of college libraries.