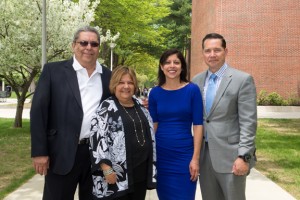 Left to right, Helen Ubiñas’s parents, Maria and Sixto Ubinas, Helen, and her husband Michael Dunne, a 1991 graduate of NECC.

Helen Ubiñas, an award-winning journalist and current Philadelphia Daily News columnist and alumna of Northern Essex Community College, is this year’s recipient of the NECC 2015 Outstanding Alumni Award. Ubiñas was the commencement speaker at the college’s 53rd commencement exercises in May.

The award is given annually to recognize a Northern Essex graduate who has achieved success in his or her career, is active in the community, and has given back to the college.

The award was presented to Ubiñas by Susan Bonenfant, chairperson of the NECC Alumni Association.

In presenting the award to Ubiñas, formerly of Methuen, Bonefant said, “She is the type of person who inspires us every day through her work. As a long-time journalist, she has demonstrated an unwavering devotion to uncovering the truth, publishing the facts, and promoting positive social change. She has won numerous prizes for her writing, including a team Pulitzer Prize for Breaking News Coverage of a 1999 state lottery shooting in Connecticut, and has given voice to countless individuals and groups who have over the years been silenced or ostracized.” 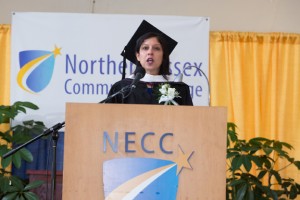 Award-winning journalist Helen Ubiñas was the recipient of the NECC 2015 Outstanding Alumni Award.

In her commencement speech, Ubiñas, who attended Northern Essex from 1990-1991 and met her husband while they were both students at NECC, encouraged the graduates to use their voices as they move forward in their education and careers.

Ubiñas is a former editor of the Observer, NECC’s student newspaper, who says she “found herself and her future” at Northern Essex. After attending NECC, she transferred to Boston University, where she earned her bachelor’s degree. She went on to earn a master’s from Trinity College in Connecticut.

Ubiñas was a longtime reporter and columnist for the Hartford Courant, Connecticut’s longest continuously published newspaper, where she was awarded a number of honors, including a team Pulitzer Prize for breaking news in 1999. In 2000, she became the Courant’s first Latina news columnist. In 2007, she was one of 12 US journalists awarded the prestigious John S. Knight journalism fellowship at Stanford University. She’s also received several awards since becoming a columnist in Philadelphia, including the top honor in column-writing at the 2014 Keystone Press Awards.