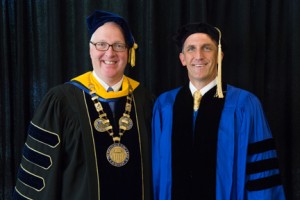 “You began your education at a community college in Oklahoma and completed your Ph.D at Michigan State working as actor and director as well as a teacher and administrator. You joined Northern Essex Community College in 2006 and rose to the presidency in 2011, overseeing two campuses…” Hopey continued his praise saying, “You have implemented innovative programs that have helped your students overcome challenges, succeed academically, develop job skills and move more readily into the workforce.”

Hopey lauded Glenn for his work with the city of Lawrence to create economic vibrancy and educational opportunities for local residents. He noted that President Glenn had chaired the Lawrence Partnership and served on the Essex Heritage Foundation as well as the Merrimack Valley Chamber of Commerce.

“Lane Glenn your determination and drive have bettered the prospects of so many in our region, and exemplify the power of learning to improve lives,” Hopey said.

Others who received honorary degrees from Merrimack College were alumnus Dr. Arthur M. Fournier, professor and vice chairman of the Family Medicine & Community Health Department and the associate dean for community health affairs at the University of Miami School of Medicine; Richard Gallant, chairman of Global Technology Finance, a financial surety company he cofounded, and president of Fibertech Medical, a mid-sized endoscopic repair company; and Dr. Nancy J. Sullivan, an alumna of Merrimack College, who is chief of the Biodefense Research Section, National Institutes of Health’s National Institute of Allergy and Infectious Diseases, Vaccine Research Center (VCR), in Bethesda, Md.