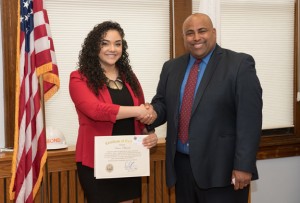 NECC graduate and Lawrence resident Kiara Pichardo is congratulated by Lawrence Mayor Dan Rivera after receiving a citation from the Lawrence City Council for her academic success.

The Lawrence City Council recently presented Lawrence resident and Northern Essex Community College graduate Kiara Pichardo with a special citation based on her academic success and demonstrated leadership.  The citation was presented by Councilor Marc Laplante.

The 20-year-old graduated in May with honors from Northern Essex. She earned an associate degree in liberal arts: theater option. In the fall she will transfer to Fitchburg State University where she will continue to study theater.

Pichardo came to Northern Essex after graduating from Lawrence High School’s Performing & Fine Arts Academy in 2012. She was intent on majoring in photography, but that all changed the day her cousin convinced her to audition for a role in NECC’s production of “Beaux Stratagem”. She walked away with the role of Cherry as well as the new found knowledge that acting was her future.

She appeared in several of Northern Essex’s plays including “Mirror Man,” How the Other Half Loves,” “Front,” and “Stuart Little”.  Her acting resulted in a nomination for the American College Theater Festival.

“I love this school,” Pichardo said of NECC. “It offers a lot of opportunities.”

Pichardo was also active in NECC’s Pathways to Academic and Career Excellence (PACE) Program and Lawrence’s Boys & Girls Club, of which she is an alumna.