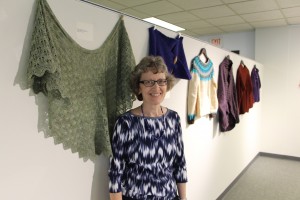 Lynne Nadeau, organizer of the NECC Fiber Arts Exhibit, stands in front of a leaf lace shawl she knit.

A casual compliment, from one colleague to another about a hand knit sweater, has resulted in a Northern Essex staff and faculty fiber arts exhibit in the newly named Linda Hummel-Shea ArtSpace in the Bentley Library on the Haverhill campus, 100 Elliott St.

On exhibit are more than three dozen items created by some 15 NECC employees who work with various fiber arts as an avocation.

This exhibit is free and open to the public.

Lynne Nadeau, director of NECC’s Tutoring Center, who organized the exhibit, says someone once complimented her on a sweater she knit, which led to a discussion on knitting, which, over time, led to discussions on other hand crafts.

While there was a knitting group on campus for years, there was never an exhibit.

“I’ve known for a few years that lots of folks on campus are involved in fiber arts,” said Nadeau who is herself a knitter. “I thought it would be nice to acknowledge the artistry of these crafts.”

When she approached Mike Hearn, NECC’s library director, he immediately embraced the idea as the ArtSpace is empty during the summer months. He liked the idea of hosting an employee exhibit in June or July when the library has a more relaxed, informal atmosphere. 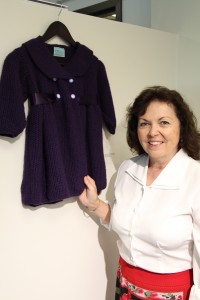 Susan Fichera exhibits a child’s smock coat with satin ribbon that she knit.

Both Hearn and Nadeau said they would have been happy with submissions from just a few Northern Essex employees, but were delighted when more than a dozen employees submitted pieces.

The fiber arts represented in the exhibit include, knitting, crocheting, quilting, rug hooking, and needle punching.

“We have a wonderful range of craft techniques and materials with interesting interpretations,” said Hearn.

The exhibit will be displayed now through Thursday, July 2, during normal summer library hours.

Nadeau and Hearn may organize another NECC Employee Fiber Arts Exhibit next summer.

The following employees participated in the Fiber Arts Exhibit:

For additional information, contact Lynne Nadeau at lnadeau@necc.mass.edu or Mike Hearn at mhearn@necc.mass.edu 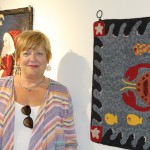 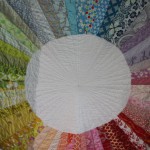 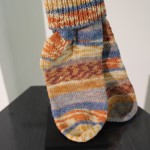 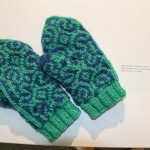 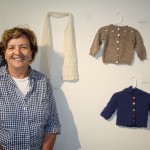 Ann Grandmaison with two children’s sweaters and a scarf she knit. 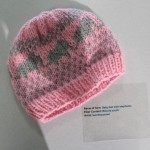 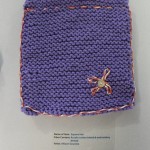 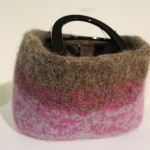 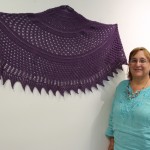