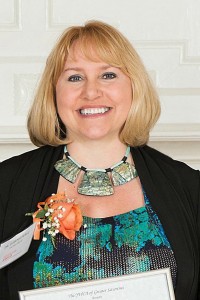 NECC’s Dean of Student Success Dawna Perez of Haverhill was recently honored by the Lawrence YWCA.

Northern Essex Community College administrator Dawna M. Perez, Ph.D., of Haverhill, was one of 23 women to be honored during the 32nd Lawrence YWCA’s Tribute to Women held recently at the Andover Country Club.

As Northern Essex’s dean of student success, Perez heads the Student Success Center on the Lawrence campus where she is responsible for linking and expanding student success strategies and initiatives across the college.

Perez, who has worked at Northern Essex in a number of positions since 2006, was nominated for the honor by several Northern Essex colleagues, all of whom lauded her for her for being a role model, mentor and consummate professional.

“She is committed to helping students succeed and her priority is about retention so as to empower students to achieve their dreams and have a better life for themselves,” wrote Karen MacDonald Fehr, LICSW.

NECC’s academic success/career coach Karletty R. Medina, was in the 6th grade when she first met Perez who was overseeing 63 Lawrence students in an “I Have a Dream Initiative,” wrote, “To us, ‘I Have a Dream’ was not just an afterschool program or Dawna’s job, it was our lives and she was another member of our family. We saw them every day, even on weekends, for 8 years of our lives. Dawna was, and still is, my mentor and my friend.”

Gisela Ramirez Nash, NECC’s director, Title V/Student Success Programs, supported the nomination writing, “Throughout her life Dawna has been committed to improving literacy and education in the city of Lawrence.  As a young adult she became involved with the ‘I Have a Dream Program’, an educational initiative designed to positively impact and transforms the lives of young Lawrence residents. Later, she was involved with the Literacy Works Program.”

“Whatever the title, Dawna has been a champion of students, particularly those from historically underserved populations,” wrote Bill Heineman, vice president of NECC’s academic affairs and student affairs. “Dawna has achieved so much at the college, and her positive attitude and “can-do” spirit are greatly valued.  She has taken on difficult challenges with enthusiasm and good humor.”

Prior to being appointed dean of student success, Perez served as NECC’s associate dean of access and community building and was charged with overseeing NECC’s Community Relations Office and the Grant Resource Center. She also had a leading role in several national and local initiatives. Perez has also been the driving force behind the Early Alert Program, a pilot program designed to identify students struggling with academic and non-academic issues, and eliminate barriers that impact their success.

Fluent in Spanish, she has a clear understanding of Latin culture and is sensitive to the diverse needs of NECC’s students and the Lawrence community.

She holds a Bachelor of Arts in Spanish and Sociology from Colby College, a Master of Business Administration in Human Services from Brandeis University, and a Ph.D. in Organizational Systems from Saybrook University.

Perez lives in Haverhill with her husband David and four sons.

For 32 years the YWCA’s Tribute to Women luncheon has honored a select group of women who live or work within our service area of the Merrimack Valley, Essex County or Southern NH. Honorees are women of achievement in both their professions and communities who have made a difference in the workplace and in the community.