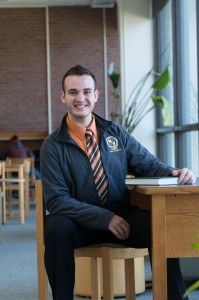 When Kevin Carvalho transfers from Northern Essex to Fitchburg State University in the fall it won’t be his first time starting over, but it could be his easiest.

The 21-year-old, who emigrated from Brazil when he was six, spent much of his youth moving from one community to another. He says transferring from Northern Essex to Fitchburg has been seamless under the MassTransfer policy. Under MassTransfer, students attend Northern Essex, graduate, and automatically transfer into a program at a four-year state school.

Kevin graduated in May ’15 with an Associate Degree in Criminal Justice and a 3.75 GPA. He will be one of the first students in Fitchburg State’s new “4 + 1” criminal justice program. He will graduate with a bachelor’s degree, a master’s degree, and a police-academy training certificate.

The Haverhill resident was born in Rio de Janeiro. When his family moved to the United States, he attended various Massachusetts school systems, lived briefly in Minnesota, and returned to Massachusetts where he graduated from high school.

By then, he was self-supporting, attending college part time, and working 65 hours a week at a donut shop. While he learned to budget his time and his money, he also learned he wanted an education.

Kevin moved in with his older brother and enrolled in NECC’s Criminal Justice Program as a full-time student.

“I feel like I’m finally doing something good for myself,” he says.

At NECC Kevin was president of the Criminal Justice Club and the criminal justice representative to the Student Senate. He belonged to the Phi Theta Kappa Honor Society and the Student Leadership, the Presidential Ambassador, and Internship Programs.