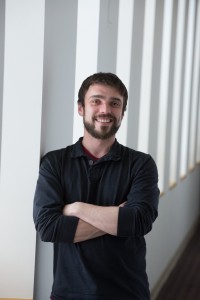 Tim Field knew Northern Essex would help him jumpstart his career as a software developer, he just didn’t expect it to happen so fast.

The Haverhill resident was hired at Muzzy Lane, an educational software firm in Newburyport, after working there as an NECC intern. He graduated from Northern Essex in 2014 with an Associate Degree in Computer & Information Science.

The 31-year-old Boxford native graduated from Masconomet High School in 2002. He was accepted into an engineering program at a prestigious four-year college, but realized quickly it wasn’t his dream.

For nearly 10 years he worked in retail, taking an occasional college course to see where his interests may lie.
“I realized I needed to do something different,” he says. “I had a vague idea of what I wanted to do because I had taken a summer school computer programming course.”

He enrolled in Northern Essex’s Computer & Information Science Program. Almost immediately he knew he was where he was supposed to be.

“I like the logic of programming. I find it satisfying to have the freedom that comes with it,” he says.

On his way to earning his degree, Tim participated in Northern Essex’s internship program which placed him at Muzzy Lane where he was immersed in web development. This experience, he said, confirmed he was in the right field and helped him narrow down his focus.

“What I ended up liking wasn’t what I expected,” he said. “I learned from doing. I learned by writing code. I like creating the user experience.”

Northern Essex, he said, prepared him well for his career.

“The program was great. I took higher-level computer science courses and always felt challenged. My professors had worked in the industry so they provided interesting, thought-provoking material. They didn’t just approach it from a classical academic perspective.”