Teaching Technology is Her Trade 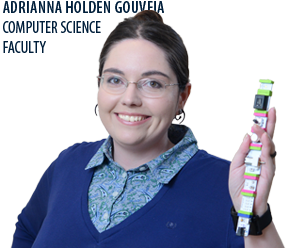 “I’ve always been into technology,” the NECC computer and information sciences (CIS) professor says. “I can’t really remember a time when we didn’t have something tech related in the house to play with.”

Despite having grown up with technology or because of it, Holden-Gouveia says, the subject never, ever gets old.

“It’s always changing. I never teach the same course twice…my courses change between 20 and 50 percent each year because I introduce new topics, new books, new assignments, and new skills. Even week to week there is always some breakthrough in technology.”

With this evolution in mind, Holden-Gouveia has her students bring a tech news item to class each day.

“The first 10 minutes of each of my classes begins with tech news,” she says. “Whether it’s gaming, biotechnology, assistive technology, or even a cool, new gadget, something is happening every day.

While she teaches a variety of CIS, information technology, security and networking classes, Holden-Gouveia has a soft spot for the introductory classes.

“It’s so much fun to see the students get into technology if they weren’t already or get more into it if they already were,” she says.

Holden-Gouveia was, herself, already into technology when she enrolled at Clark University where she double majored in theoretical math and computer science and minored in art. She also earned an MBA from Rivier University.

She is continually inspired, she says, by both the diversity of her students and her days. Her classes, she says, are not lecture heavy. She employs lots of hands-on activities and projects and exposes students to lots of new technology like “squishy circuits” or “littleBits”.

“Tech is so cool by itself, I don’t have to work too hard to find fun things to do and get them interested,” she says.

Now is a great time to enter the CIS field, she says, There were 200,000 unfilled cyber security jobs in the U.S. last year; Some of which not even one person applied, she says. One industry report, she says, indicates that the shortage worldwide is closer to 1 million unfilled jobs in cyber security and data analytics.