Zachary Rice never pictured himself as a college student since he was admittedly a “less than serious” high school student. When he graduated from Shrewsbury high School in 2000, he decided to forego college and concentrate instead on earning money. 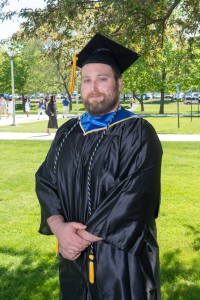 NECC Lab Science Graduate, Zachary Riceadmittedly a “less than serious” high school student. When he graduated from Shrewsbury High School in 2000, he decided to forego college and concentrate instead on earning money.

Over the next 12 years, he built a successful career for himself, one in which he played a management role in a company that made and installed high-end countertops.

Zach was happy with his career choice and was doing well financially. This all ended when he woke up one morning in December of 2009 and found he couldn’t move, due to a spinal cord injury.

Immediate surgery was required, and before operating, the surgeon told Zach he may have to get used to the idea of not being able to walk. After a grueling 11-month recovery, Zach regained the use of his legs, but he knew that a career change was in order. He simply couldn’t continue with the physical challenges of his job.

Zach decided to explore his options and he began looking for a career program that would get him into a job and a new career quickly. That’s when he learned about Northern Essex’s Associate Degree in Lab Science, which prepares students for careers as laboratory technicians in the fast-growing life sciences field.

While a student in the program, Zach excelled, discovering that he loved learning. He earned a 3.7 GPA and graduated from the college’s Honors Experience, an academically-challenging program for highly motivated students.

Zach is now employed as a quality technician II for EMD Millipore, the life science division of Merck KGaA, with plans to continue his studies and earn a degree in chemistry.

Zach is so happy with his life and his new career that he calls his health crisis “the best thing that ever happened to me.” He says, “The lab science program changed my life, leading me to a new career, one that I love.”