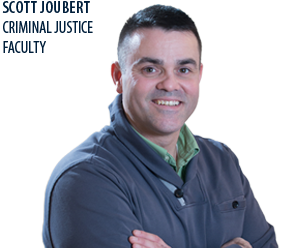 Scott Joubert may teach tough courses in NECC’s Criminal Justice Program, but at heart he is really a “helper” teaching others to be “helpers.”

This may sound simple, Joubert says, but criminal justice is anything but simple.

“While the field from the outside seems to remain static, crime is still a facet of our society. The internal changes that are taking place are truly extraordinary,” he says.

“There are so many aspects of the field that I still to this day get excited about; just ask my students. I truly love teaching and discussing topics on Domestic Violence and the Path to Extremism with my students.”

By his own admission, Joubert says he was not unlike other children who dreamed of becoming police officers. When pressed, as a teen, as to his future plans, he told his mom he wanted to “do something that helped other people” True to his word, he earned his associate degree from Quinsigamond Community College (QCC) and trained as a correctional officer for the Worcester County Sheriff’s Department.

“I knew then I was moving in the right direction,” he says.

During his 15 years is a CO at the Worcester County Jail, he learned valuable skills and information that continue to influence the way he thinks and what he teaches in the NECC classroom.

“I recognized that many of the offenders represented a segment of society that was lacking the proper attention,” he says. “With a national recidivism rate of 64% one year after release and 85% after five years, we have to be looking for qualified individuals committed to finding new ways to decrease crime and rehabilitate offenders.”

Once he began teaching at his alma mater, QCC, Joubert says he “discovered his true calling in life”.

“What better way to help and make policy changes than from within, by teaching empathy and understanding for both victims and offenders to the very people who would one day make the changes necessary,” he says.

Nationally, the growth is in the area of Homeland Security. So, it was no surprise to Joubert that when NECC began offering a course that he helped design titled “Response to Terrorism,” it was so popular an additional section had to be opened.

His students find he enthusiastically teaches theoretical concepts coupled with the experience of applying those concepts in the field. What they won’t find is someone who lectures.

“I like to spend my contact hours engaging my students in open discussions, small and large groups, and debates on topics that I feel are the most critical to address each week; topics that will make them better criminal justice professionals.”