Affordability was the Ticket for Timberlane Graduate 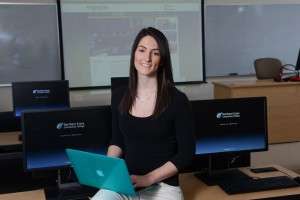 The affordable price tag on an NECC education was something Taylor Langlois couldn’t ignore when she started scouting colleges.

The second youngest of four children, the 2013 Timberlane Regional High School (TRHS) graduate was well aware she was paying her own college expenses. She was also aware that even with a decent scholarship she still couldn’t attend a private, four-year institution.

“I looked and I thought ‘I can do Northern Essex. That is what I can afford’,” she says. “In addition to being affordable, it was close to home, and I was familiar with the college; my mom and uncle attended NECC.”

Also, Taylor says, she wasn’t entirely sure what she wanted to study. As an
honors student at TRHS she had enjoyed web design, so she enrolled in NECC’s Web Development Certificate Program. After taking Introduction to Computer Science she realized she belonged in the Computer & Information Science (CIS) Program.

“It was programming, yet it was creative,” the 20-year-old Atkinson, NH, resident says.

With the help of her academic advisor, a professor in the CIS program, she plotted an academic course that included taking classes through the Northeast Consortium of Colleges and Universities in Massachusetts (NECCUM), a partnership that allows NECC students to take classes at 10 other colleges while paying NECC tuition. Soon, Taylor will take classes concurrently at NECC and UMass Lowell. By the spring of 2016 she will transfer into UMass Lowell’s Computer Science Program full time.

Taylor, who works three part-time jobs and is a high honors student with a 3.92 GPA, has made the most of her time at NECC participating in both the Student Leadership Program and the Internship Program.

She aspires to become a program manager, which, she says, is a nice blend of
computer science and business. She dreams of programming for Google.