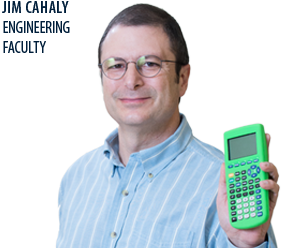 With seven patents and 32 years in the engineering field, Jim Cahaly has a hands-on kind of knowledge that he easily shares with his engineering students.

He became interested in engineering as a child growing up during the space race of the 1960s. Cahaly says he watched the Apollo missions with awe.

“Like so many other children of my generation, I was so enthralled by these feats of engineering that I was inspired to become an engineer,” he says.

Now, as a professor in NECC’s Engineering Program, it is Cahaly who inspires others to become engineers.

From those early Apollo days, Cahaly went on to earn a Bachelor of Science degree in Mechanical Engineering from UMass Amherst and a Master’s in Business Administration from Babson College.

As an engineer, he says, he has had the privilege of witnessing the beginning as well as the evolution of many products. He worked on two patents for the emerging automotive airbag industry, four patents in the factory automation industry, and one patent in the solar power industry.

“There really is always something new and interesting to work on,” he says.

There are many engineering opportunities locally, he says, the areas of biomedical, civil, computer systems, and networking engineers are among the fastest growing fields in the Boston area.

Cahaly started teaching physics at NECC in 2002. By 2011 he added engineering design classes. But his teaching days really started more than 30 years ago, he says, when as a professional engineer he was tasked with teaching the new, incoming, young, engineers the ways of the engineering world.

“It was wonderful to watch these young people begin to expand their creativity in developing new and innovative products,” he says. “I love that moment when I see that ‘light’ turn on in a student’s eyes when for the first time they feel empowered to actually create a new and innovative design from only their imagination. Once turned on, that light rarely ever goes out.”

His students can expect to work on “real world problems” like designing a two-stroke engine or a smart phone holder while listening to the strains of Bach or Mozart.

“I assign problems and projects that students are accustomed to seeing every day,” he says.