Journalist Found Her Voice at NECC

As an award winning columnist for the Philadelphia Daily News, Northern Essex alumna Helen Ubiñas covers hard-hitting news stories, such as the Baltimore riots and the fatal Amtrak train crash outside of Philadelphia. 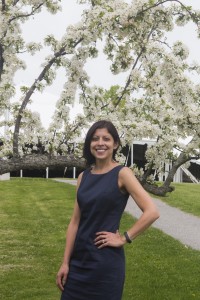 When news happens, she’s on the scene, frequently putting herself in the center of chaos and often in the way of danger to interview sources and get the story.

Her job is both exhilarating and rewarding, and she is clearly not one who is easily intimidated or flustered, whether she’s interviewing a reticent politician or a grieving parent.

As comfortable as she is covering a breaking news story, public speaking is one thing that is definitely outside Ubiñas’ comfort zone, which is why she was more surprised than anyone when she accepted NECC President Lane Glenn’s invitation to be this year’s featured commencement speaker.

“I realized that NECC was giving me an opportunity to thank them for the role they played in my life. And to remind the students who are graduating what a gift that school is,” she explains about her decision to accept.

In her inspiring speech, Ubiñas shared how Northern Essex changed her life, saying “I found myself and my future here.” (She also met her future husband Michael Dunne, formerly of Newburyport.)

Ubiñas says she arrived at Northern Essex in the fall of 1990 feeling “lost” after a less than stellar semester at a four-year university. She had always loved to write which is why she was drawn to the journalism program while at Northern Essex, eventually serving as editor of the NECC Observer, the college’s student newspaper.

After Northern Essex, she transferred to Boston University and landed a job out of college with the Hartford Courant, where she was awarded a number of honors including a team Pulitzer Prize for Breaking News coverage of a 1999 murder-suicide at the Connecticut Lottery headquarters that took the lives of five people. In 2000, she became the Hartford Courant’s first Latina news columnist.

In 2011, she left the Hartford Courant, and in 2012 joined the Philadelphia Daily News, where she continues her great work. In 2007, she was one of 12 journalists in the United States to be awarded the prestigious John S. Knight Journalism Fellowship at Stanford University.

Ubiñas says that as a journalist, she’s motivated “to try to keep the powerful honest and give those without power a voice.” Her insightful coverage has provided a voice for many who have been underrepresented, and Northern Essex is proud that she discovered her voice here.